That’s Captain Cowell’s right, if you were wondering. You can learn more about his biography here, from the National Army Museum London website (where my very dear friend is lucky I have not begged, implored and entreated her to go, since she is vacationing in London, basically at the very instant you are reading this.) 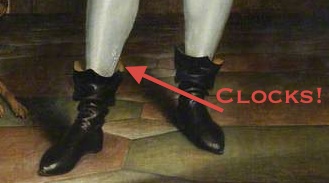 What I am interested in is what the painting shows us. Like The Drowsy Dame, there’s fun the details quite aside from the those slouchy boots. Inside those boots are silk stockings with clocks, a lovely detail that that shows you what class level should be wearing clocked silk stockings in perfect repair in the British Army. Anyone else not of the class that could afford a commission might want to think about having second-hand silk stockings…and, since we’re at the floor level, nice dog. I think he wants walkies, Captain.

The 18th-century fit is clear, too. Those arms may look sheathed in lycra, but they’re in wool; since the Captain served on St. Thomas, it is probably not just very fine but also lightweight. Portraits are idealized, so the Captain may not have been so very superman looking, but the fit of his breeches and coat probably served to accentuate, if not create, his graceful and refined form.  And then there’s the soldier.

What caught my eye first on the soldier were his overalls, since I’m so frequently stuck with them in my sewing basket. These fit him closely, too, and are probably shaped much like these at the Met. There are six buttons on the placket at the ankle, and the strap under the instep is forward of the placket. The soldier’s feet look small (not unlike some regiments I know…) but the tongue of the overalls fits perfectly over his foot. It’s easier to do in paint than in linen, but I’ve seen them fitted this well, and the gentle cyma curve of the outseam is what you want.

On his back, the soldier has a knapsack that’s clearly made of a goat. I don’t know why they’re goatskin (this is not my army) but it’s startlingly goat-like. Other regiments carried them (see here for Troiani on the 33rd Reg’t of Foot), but I suppose the goatskin made a natural pouch shape and was water resistant (after you’d eaten the goat?). What you see on reenactors are mostly the square skin knapsacks, but when we go to Monmouth I will have to keep my eye out for the goat-shaped packs.

The large sack he’s carrying is also intriguing. The material looks to be striped, or woven with a purposeful variegation, which raises questions beyond linen-or-wool. Why trouble to die the material? Are the colors significant? On a practical level, the bag or sack probably contains any extra clothing and his blanket; it looks too light to contain much else. We can’t see his haversack,but we can see his cartridge box (the shiny black square under the goatskin) and his bayonet. But where’s his musket?

The more I look at and think about this painting, the more I wonder not just about the quotidian details we can pick up, but about the symbolism and the meaning. It has the look of “job well done, headed home” as the soldier carries his kit away, and the Captain sheaths his sword. Maybe that’s what we’re shown: tour of duty over, the Captain Cowell and troops head home, and the dog will finally get his walkies.

For a look at earlier British ‘dogs of war’ let slip in America, you might want to read Don Hagist at All Things Liberty, as well as Hugh T. Harrington, for dogs on the other side.