Some seem easy: Slavery in Rhode Island: Everyone was involved, everyone is connected. Slavery is part of our shared past. We are all part of the web of complicity. (Pick one, they’re all related.)

For the house museum, and the living history day at the house museum, it’s a little more complicated. We tried an involved story line last year and it didn’t seem to matter to visitors who were mostly intrigued by watching pretty costumes in a pretty house. 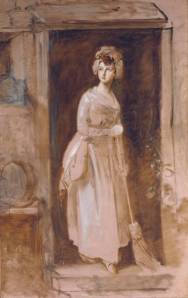 What I’ve settled on for now is a crude variation of “it takes a village,” in that a complex web of food and support networks was necessary to sustain an elegant 18th century mansion. (Our theme this year is Rhode Island Seascape and Landscapes, AKA Surf & Turf.) I begin to imagine diagrams that support that theory: small holding farmers and dairymen and fishermen who sold supplies to the wealthy, the merchants importing goods, the sailors and captains and shipbuilders needed to bring the barrels of china, boxes of sweets and tea and nankeens back to Rhode Island to support the scenes of elegant perched at the very top of the social pyramid.

Then I come to my personal interpretation and Bridget Connor. What is that story about? A Bridget with a troubled past and nothing left to lose? Poor women struggled to survive in an unstable war economy? Or simply that not everyone in the Revolution was a hero?

1 thought on “Open to Interpretation”