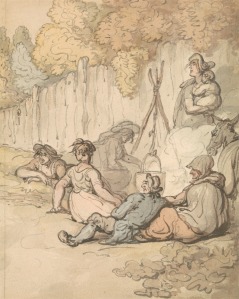 Once again, I’m sleeping 18th-century-style, but without of the luxury of sleeping late. What wakes you in the middle of the night? Whatever woke me, I finally fell back asleep after 4:00 thinking of what to make for Stony Point.

This will be a cold camp, with very limited cooking, which presents a stiff challenge for the caffeine-dependent, as I must confess I am. (There are gentlemen in the expected party who are also not quite themselves until they’ve had their coffee, too, and they know who they are.)

I’m up against it, this time, given how I will be spending the week leading up to Stony Point (very busy) and that Friday (giving a talk in Newport, instead of baking). As a devoted fan of breakfast, I usually spend the Fridays before a weekend event baking and assembling the provisions for the weekend; this time, however, I will be crossing and re-crossing a bridge.

As I considered prepping a pork-apple-and onion pie Thursday night for Mr S to bake on Friday morning, and the logistics and food safety concerns associated with transporting and eating meat, it finally came to me: Indian pudding. Simpler, easier, filling: all the remains to be done is to talk the Young Mr into eating it, though when presented with no other option, he may acquiesce, at last, to reality.

5 thoughts on “An Insomniac Dreams of Pudding”