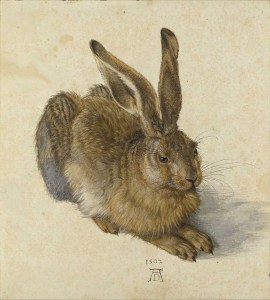 The Hare. Watercolor on paper by Albrecht Durer, 1502. The Albertina, Vienna.

The Witch. I had to go see it after Mr JS sent me a link to this article, and of course I was captivated. (I also needed a break after what was very nearly the Worst Week Ever, starting Wednesday at 4:30AM.)

“The recreation of farm life in 1630s Massachusetts is so complete it pulls you into the pocket universe that exists inside the characters’ minds. As you experience their fear, you experience your own. The barrier between you and the people on film disappears, and their terror consumes you. And that is how you make a scary movie!”

That pocket universe: that’s what some of us are after when we go about this living history business, creating a world so seamless (or so meticulously hand-seamed) that you, the interpreter, appear to inhabit the past and the present simultaneously.¹

So how does it work? How did it work in The Witch?

“…authenticity for the sake of authenticity doesn’t really matter. To understand why the witch archetype was important and interesting and powerful—and how was I going to make that scary and alive again—we had to go back in time to the early modern period when the witch was a reality. And the only way I was going to do that, I decided, was by having it be insanely accurate.”

Got that? Authenticity for the sake of authenticity doesn’t really matter.

But the only way to make the witch powerful was to be “insanely accurate.”

The only way to make living history powerful is to be <ahem> insanely accurate.² If we’re not, the points where we are not accurate will stand out, the spell will be broken, and the visitor will be lost. The real thing is the right thing for your time and place. Context: It really does matter.

That means that just because you perfectly replicated a silk gown from a French fashion plate it may be wildly incorrect for the streets of Providence, Boston, or Philadelphia– much less a military camp– even if it’s the same year as the event you’re attending. It means that just because you got every buttonhole perfect on your 1765 frock coat, it won’t be right for an 1803 funeral if you’re only 30. 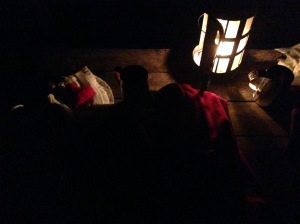 Don’t take an anecdote to a data fight.

When you’re wearing and carrying the right clothes and objects for your portrayal, you can focus less of the what and more on the why. As interpreters, re-enactors, enactors, whatever you want to call yourself, we lead the visitor to better questions and a better understanding of not just events but the meaning of the past if we are thoroughly convinced and convincing. And that only happens by questioning ourselves.

The Witch is a horror movie, and while it was tense, the world it portrayed felt pretty close and natural to me and to Mr JS. Maybe that’s because we spend so much time trying to understand that vanished world—it’s Roger Williams, baby—maybe because we engage in living history and material culture. I don’t know if it’s scarier for folks who don’t have that level of context, don’t assume a world where hierarchy, acceptance, succumbing to a higher power, is normal. Where everything is a matter of faith, and belief. It’s a tiny world, that past. We were so immersed in that world that walking out into the mall was a shock: colors, noises, smells. And the world was so immersive because the details were so correct.

Ultimately, what we do with living history is interpretation, and interpretation is provocation.³ But what should be provoked is not a question about what you have, but why you have it, and what you’ll do with it. And that only happens if you have the right thing.

1 Your mileage may vary. It’s my dream goal. “Man’s reach should extend his grasp” and all that.

2 That is, as accurate as possible, recognizing the limitations of modern materials and access to primary source documents. More on that later.

1 thought on “The Devil is in the Details”