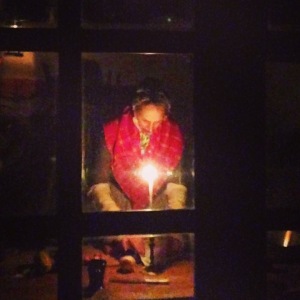 Through the barracks window on Friday night. Photo by Eliza West.

While for some events there are no second chances, Fitzgerald himself knew it wasn’t true that there are no acts in American lives.  And so it is with Fort Ticonderoga, changing hands several times throughout its existence, until British troops, retreating in 1777, did their best to raze the structure.

A day after participating in the “Now Left to their Own Defense” event at the Fort, I feel a bit destroyed myself, in the best possible way. (It isn’t history till it hurts, but sometimes cold nights on straw-filled ticks get into what’s left of my hip bones.) 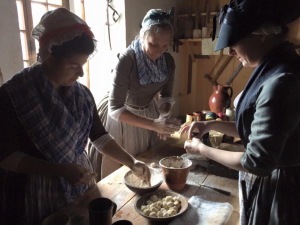 Women at work. Photo by M.S.

Every trip to Ti teaches me something new. This time, against all odds, it was cooking. Against all odds because I usually object to reinforcing gender norms at living history events, particularly in a military setting, when women did not typically cook for mens’ messes. Fort Ti is different: both times I have cooked there, it has been as part of the women’s mess.

Done! And no, it didn’t taste burnt. Photo by M.S.

This past Saturday, we may have gone a bit overboard, but we justified our efforts with the thought that Loyalist women would not only have used up all the supplies they could (waste not, want not) before retreating, but that they might also have striven for normal activity and to prove their worth to men whose protection they needed.

To that end, we made bread pudding. I’m a fan of Indian pudding and rice pudding, but I’ve never made a bread pudding, despite the similarity of these starch-and-custard concoctions. I like to think that rather than having reached a “throw reason and caution to the winds” point, I have, like any good 18th century cook, become comfortable enough not to rely on measuring cups but rather trust my eye and experience. Enablers help, of course, and I had the pleasure of spending my day with some of my favorites and meeting new ones, too.