This plate has stuck with me for years: those mailbox shapes, in velour! In 1807, velour was not what we think of today (and I don’t mean Zapp Branigan). Valerie Cumming’s Dictionary of Fashion defines velour as “Wool or wool mixture cloth, soft and smooth with a closely-cut pile or nap resembling velvet.” Not having access to wool velour in the scrap bins at work, or in the fashion aisles at the local fabric store, I opted for velvet; the scrap bin provided pink silk taffeta, which I thought made a nice contrast to the texture and finish of the velvet. It is true that “velure” dates to the 17th century, and describes imitation velvet. The wool velour I’m familiar with from upholstery is too dense and heavy to drape well over a bonnet (it’s really made for sofas and armchairs), so erring on the hand of the fabric seemed a reasonable choice. Wool velour with silk satin would be an amazing textural contrast, but with this color combination, almost any fabrics will give a pleasant optical shock.

Shaping the brim was an exercise in paper and pasteboard, winging it a bit until I achieved a length and width that was mailbox-like but not too drainage tunnel. The cartoons of the period make clear that these are deep brimmed bonnets. I do like that the bonnet on the left is trimmed so like the ones in the fashion plate; the one at right is probably corded or reeded, judging by the ridges. 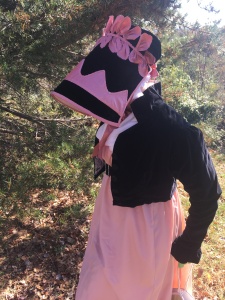 The trickiest bit was shaping the silk to the compound curve of the brim. Three patternings got me there– until I realized the silk needed body to hold up to binding, and took a short cut. Ask not of the sin of fusible interfacing, for I have learned my lesson. Yes, the silk piece shrank and no longer curved evenly from the front edge. Thank goodness Drunk Tailor was watching The Pacific, so any foul language I may have used was disguised by movie dialogue. The binding is bias-cut silk, easy enough. After the debacle of the Vandyke trim, I opted not to cut and bind the leaf shapes, but rather to cut the ovals with pinking shears and attach them along a silk band. Would I do it differently another time? Possibly, if only because I like to imagine the different ways an American milliner might interpret a French fashion plate. 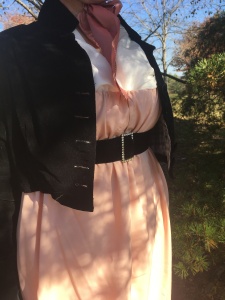 Once I settled on making the bonnet, I decided it was time to finish a pink wool petticoat I started in 2015 after a trip to Mood. It’s a tropical weight Australian wool, according to its selvedge, and has a high-waisted bodice with a drawstring closure. I covered the bottom drawstring (and added some bling) with a black velvet belt closed with a period paste buckle. (Every now and then someone doesn’t know what they’ve got, and lets it go for a price I can afford.) On top, the gathered back cotton velveteen canezou/Spencer made for my first trip to Genesee. Having a wardrobe extensive enough to mix-and-match almost the way I do from my modern closet is pretty satisfying, if a little crowded.

This isn’t a bonnet for wearing while crossing a busy street, though it will successfully shelter the wearer and a cat from any sudden downpours, and one is unlikely to get sunburned wearing this. I didn’t find it distracting to wear– but I didn’t go far, and I had a companion. But what price fashion?