Did I really need another English gown? Well….that cinnamon Virginia cloth, though. Reader, I saw it and I bought it, because: Paul Sandby. The color of the cloth struck me as being about as close as I am likely to get to this image, and since I own a yellow petticoat and suitable accessories, it seemed nearly a necessity.

At this point, I’ve made enough gowns that I can pretty much fit the shoulder and sleeve myself (especially since I sprang for the new dress form). I’ve lengthened the sleeve, and tweaked the shoulder strap to compensate for the curve in the original (a straight-cut piece works better for me). Future sleeves will need to be made a little wider across the bicep, as I have gained some muscle. 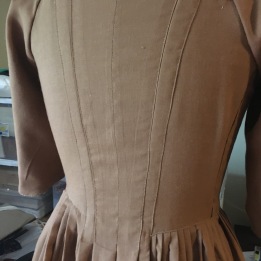 Shopping with a basket at Fort Fred. (photo by Denise Wolff)

The fabric pleats well, though the edge has a tendency to fray a bit, as I learned when I made the first gown I ever really liked. But these fabrics have much to recommend them in color and weight, bridging seasons and locations–the weather in the South being rather different from that in New England. That gown was good for cleaning in Trenton and hiking in Rhode Island, but really needs to be taken apart and remade (at some future date).

As I made this gown, I thought about what I told The Giant when he said, “I wish I was a better writer.” It’s butt in chair that makes you a better writer, and a better seamstress, or a better tailor, and better at just about anything other than an active sport. Practice, and patience, are what it takes to improve. The first things I made were not nearly as nice as the things I can make now, many gowns, dresses, coats, caps, and bonnets later. Sewing is a discipline and a craft, and perseverance pays off.

The Fort Frederick Market Fair is the place to wear new clothes and shop for curiosities, I took the opportunity to wear the new gown with some older favorites, including the best neck handkerchief I’ve ever had (hand woven by a friend), and a hat made ages ago that is finally achieving a salty patina suitable for someone of my usual station. That’s one of the best parts of perseverance: putting old and new together for a new and different look.

2 thoughts on “Virginia Cloth in Maryland”