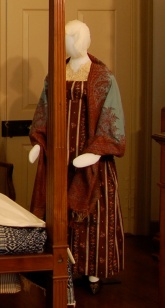 Guess what: they might not know for sure. Many garments donated to museums are given without clear dates, especially older garments donated in the 20th and 21st century. That means that dating the garments is, well, tricky.

You can find many dated to 1776 by donors. Everybody wanted to be associated with such an important event…especially around 1876, and 1976. Where I work, a dress like the one to the left was given to us with the firm statement that the fabric had been brought from England to RI (how did that work with Newport blockaded?), and that the dress was from 1776. Clearly, it is not.

To the right is Deborah Sampson’s dress, possibly her wedding dress: Don’t know who she was? Read here.

Deborah Sampson’s is a closed-front round gown. Look at the catalog record, and you’ll also note the date: 1760-1790, a thirty-year spread. Why is this? Fabric gets remade, for one thing. Deborah Sampson Gannett’s dates are 1760-1827, so if this is her dress, we know she didn’t wear it in this size or style in 1760. But fabric can easily pre-date a garment. The V&A sometimes had three dates for their Spitalfields silk gowns: the date of the fabric, the date it was first made into a garment, and the date it was altered into a new style.

Sampson marries in 1785. That seems like a plausible date for this dress, given its style. That’s where the 1790 comes in; yes, it could be that late, it’s conservative in New England and makes a nice ending to a “circa” date. So how else might this dress be dated? 1785-1790? 1780-1790, fabric possibly earlier? Given the database I know HNE uses, the date field is a little tricky (we use the same one). If I were to catalog the dress, I think I’d use 1783-1788. Why 1783? Because we know Deborah Sampson was probably not wearing dresses in 1783: she was in the Army roughly 1778-1783. I’d add 5 years to that because it encompasses the date of her marriage, 1785, and indicates that I’m not convinced or have no firm documentation that this was in fact her wedding dress. That’s just how I would approach this if the dress was in my museum and is not intended as a criticism of HNE’s cataloging. And it’s not to suggest that my own catalog records don’t need work, because they do.

What does this mean for researchers and costumers? When I do research, because I know how the process can work, it means I’m often skeptical, or wish that the reasoning behind the date was explained—especially behind a 20 or 30 year range. It also means you have to fact check yourself, with independent verification. For that, I use period images, which I’ll explore in another post.

2 thoughts on “What time is that dress in the museum?”