The apple never falls far from the tree, my mother used to say, of me and my grandmother, her mother, Elsa. Elsa went to a woman’s college, majored in botany, graduated in the mid-twenties, and went back to western New York State, where she opened an eponymous dress shop. 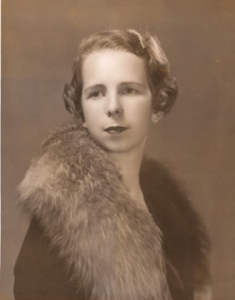 Elsa managed that shop for more than 50 years, dressed most of the women in town (or at least the type of woman who knew how to dress, and be dressed), and even dressed a woman who later became a donor to the architectural collection I managed in St. Louis.

She was a controlling woman, no doubt, and carefully managed and cared about her appearance. She was also a lady of a steely, ladder-climbing type native to the 1940s and 1950s, full of the foibles and desires of the daughter of immigrants who spoke Swedish at home. The stories they told about her would make a cat laugh: the day the local radio station called and Elsa answered the phone (on air? That part was never clear) to find out that the household had won a month’s supply of white bread.

Not of the quality to which she had become accustomed, you see: she insisted on some picky particular white sandwich bread for fancy lunches, and otherwise ate the limpa rye the cook or  Ingeborg made. All the household help was Swedish, as were the women who did alterations at the shop.

Elsa married late, at 35, and her husband moved into the house she shared with my great-aunt and their father, August, known as Morfar after my mother was born. Buying trips to New York for her store resulted in the delivery of boxes from Saks Fifth Avenue, deliveries that came so often, in such quantity that my grandfather questioned her. 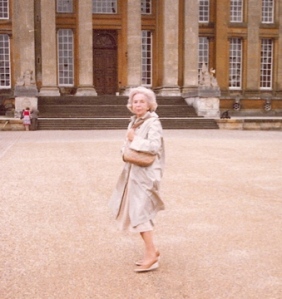 They were boxes of shoes, spectators and sling backs, pumps, court shoes, Cuban heels, stilettos, peep toes, sandals, every kind of shoe you can imagine, and all in brown, tan, beige, ecru, off-white, cream, none of them black or red or blue or green. Beige: that was her signature color, beiges and browns with occasional accents of coral or green or gold. She assigned blue to her younger sister, my great-aunt Gladys, and when Gladys once dared to buy a beige dress she liked, Elsa had a temper tantrum. A quiet one, but effective.

She died before she could meet my husband, died before I was married, and I am sorry about that. But I remembered her this week when I went with my friend (and Registrar) to visit two older ladies, sisters, on the East Side. We picked up a collection of clothing worn when the two ladies (now in their early 90s and late 80s) were babies, the wedding dress their mother wore in 1918, the dress one wore in 1939 that her daughter wore again in 1970, with quite the wrong black moccasins, at a Christmas Eve party in Georgetown.

The sisters reminded me of my grandmother and aunt, and the clothes reminded me of what my grandmother sold and boxed and wrapped in her store. Sitting at the mahogany table for lunch, drinking tea and eating a slightly stale roll, I missed Elsa and Gladys terribly, but was glad for all they’d taught me about how to behave and what the world was like for independent women in the 1940s and 1950s

6 thoughts on “A Visit with the Ladies”