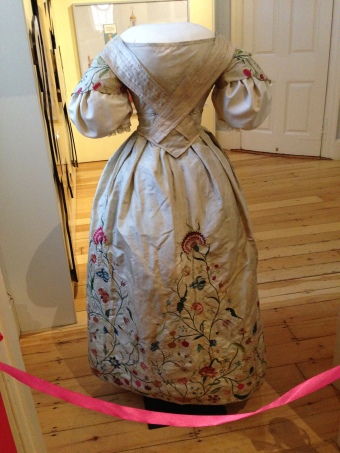 On Tuesday evening, sensibility won over sense as my friend and I boarded the T for Boston to make a long day longer. The trip was worth it, though, for the One Night Only engagement of Elizabeth Bull’s wedding dress at the Bostonian Society. In truth, I bought the tickets for the event before I was even back at work and navigating our Fair City on my own– and who wouldn’t? That dress is amazing! (Tons more images of the embroidery are in the catalog record.)

Perhaps even more wonderful than the 14-year-old ElizabethBull’s needle skills is that the dress remains with us today. Kimberley Alexander and Tricia Gilrein reminded us on Tuesday of the many ways this dress, and other remnants of Bull’s wardrobe (oh, the petticoat, and the wonderful kerchief) connect us to the past in surprising ways. Elizabeth Bull was wealthy, married to Roger Bull, a Church of England official 22 years her senior: though they lived in Boston, they were British. (They were married in the 1730s, and Elizabeth died in 1780 at about 67.)

It’s a little hard to see past the 1830s alterations, but the embroidery of the gown helps chart that course, as well as the petticoat. As important to remember is that this wedding gown was not white: it has faded from a celadon green to its current off-white color. Wedding dresses weren’t white in the 18th century, or even long into the 19th, and it’s helpful to remember that as we look at what remains and reconstruct this in our mind’s eye.

It’s easy to forget we were British first here in the United States, and that the American War for Independence did not have a foregone conclusion. We forget, too, that churchmen and their wives were socialites as much as they were people of the cloth. Put Mr Collins out of your mind, and remember (my favorite minister & fashion maven) Reverend Enos Hitchcock and his pink satin waistcoat and suits of black silk.

Like many 18th century gowns, this one was remodeled in the 19th century, its shape altered to reflect the current fashion. We are lucky to have so much preserved, not just in the gown but also in the petticoat. Paths to understanding of women’s education, the customs and habits of Boston’s colonial elite, and the persistence of past can all be found within this object.