Once upon a time, I worked (twice) for an interim boss I called (behind his back) Shiny Buttons. You know I’m in a coastal state, so you can guess what he wore: a navy blue blazer with brass buttons. It’s a uniform of its own kind, even in civilian life. For a new show at work, one of the things we’re looking at are blue coats and shiny buttons.

It got very “Hey, sailor!” in painting storage earlier this week, as we pulled out portraits looking for gents in blue coats. Sea captains are definitely representing. 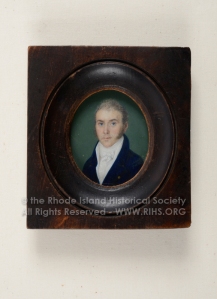 There are other gents in blue, and it’s interesting to see the proliferation of style across time.

It’s a classic look, often seen in the preppier enclaves. It’s an easy target, but don’t you love this review of a Brooks Brothers blue blazer by Biff? Timeless.