I wrote this two years ago and never published it (I was still looking for a job at the time). It’s still relevant.

Every time I go to a museum, I see a lost or wasted opportunity: galleries where connections aren’t made to collections I know an institution owns, changing galleries featuring a seemingly endless rotation of amateur local artists instead of meaningful interpretation of local objects– or, better yet, a show challenging those same artists to react to a museum’s collection. The same is true of many reenactment events. 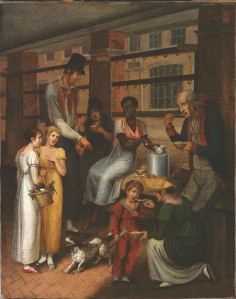 I remain deeply frustrated with the way reenacting can use documentary evidence– which rarely includes women– as a means to perpetuate 18th century misogyny in a 21st century setting. The same evidence means events often lack enough children, African Americans, American Indians, and other non-white people to create an accurate vision of the past. We know this because the demographic evidence exists, even when a manuscript fails to mention a mixed group of people in a specific place and time. (When an 18th century newspaper account uses the word “people,” you can bet that the group described included women and non-white men; if the account is about “men,” then it’s white men. Language is always coded.) The changes in the past years to include more accurate working class impressions go a long way towards creating a more nuanced vision of the past, but we’re still stuck with scenes that lack the complexity of the past.

My discomfort with this bothers me greatly. To what degree is my dissatisfaction also grounded in the understanding that recreating events in small, stagey spaces and times can de-contextualize a historical event, ultimately rendering the experience shallow and ritualistic, leaching it of meaning?

To what degree does our fixation on the appearance of participants (clothing standards) over interpretive standards or research materials serve to perpetuate shallow, surface-only events? And does the smallness of events create a zero-sum game in which someone’s talents will always be wasted, unused, and unrecognized, further feeding resentment of the “progressive” reenacting culture, sometimes even by its adherents?

All of that seems so over-thought, but in the midst of overthinking, and while deeply admiring Not Your Momma’s History on Racked, I thought about the critiques I read on @twitter, especially the part of #blacktwitter I follow, and I had a more important thought: Lead, Follow or Get Out of the Way.

Maybe it’s time for the white women to get out of the way, and to expend our energy supporting the people who aren’t included at all. Maybe I need to STFU and invest my energy where it matters more: helping ensure the really unheard voices are heard. Cheney McKnight, Dread Scott, and Michael Twitty all have important things to say about history- American history, African American history- that, at this moment in time, matter far more than what I have to say. Go follow them. Make a difference.