Lady Cat, AKA Lucky Edie, in her floofy prime

Six word stories. They’re foundation exercises in many writing classes, especially flash fiction classes. The most famous is probably Hemingway’s: “For sale: baby shoes, never worn.” So much packed into those six words, eight syllables. You can imagine a family, a room, clothes, a place of worship, a coffin, emotions. (Or a family, a room, an angry child, bare feet, and a pair of rejected multi-coloured sneakers if you’re me, who had a child who channeled his great-grandmother and thus was incredibly picky about his shoes at 16 months and refused to wear anything except solid red Keds.)

I have a six word story for you: My cat is dying of cancer. 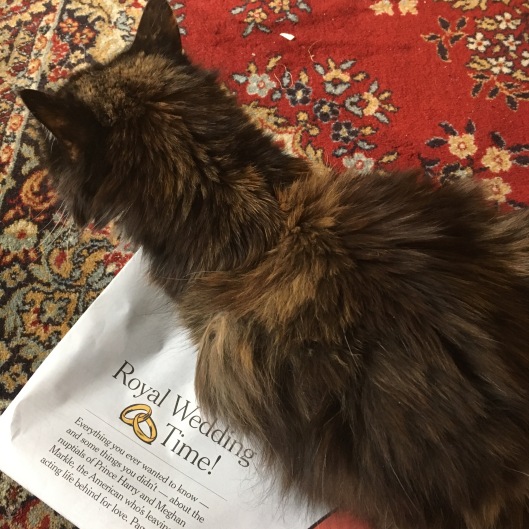 Lady Cat, Lady Bird, Flirty Birdie, Lady Fat, Lucky Lady, Lucky Eatie: She has had many names since we scooped her up from the back yard of our Smith Street 3-decker in 2005 and brought her on up to the East Side (it is possible to literally re-enact The Jeffersons’ theme song in Providence). She was born under a sheet of plywood against a garage behind our house, one of three fluffy kittens born to a short-haired calico mother. She and her litter mates were like a dessert tray: one fluffy and biscuit coloured, warm, light brown; one, vanilla-cream coloured, soft ecru; and Lady, rocky road ice cream, pastry, caramel, cream, and chocolate, with a stripe down her nose like a monkey.

Lady and Socks: prelude to peace

She wasn’t easy to catch, but I managed, on the very last day we would ever be in that apartment, caught her and wrangled her into a cat crate where she spun around like the Tasmanian Devil in the Bugs Bunny cartoons. Eventually she settled down to watching me and the movers hustle the last pieces out of basement on onto a truck, and made the trip over the river and up the hill to a new, larger house.

As my son struggled with spelling homework, Lucky Lady and her arch-nemesis Whiskers (the cat who lived in the house behind us) became the stuff of legend– Whiskers more than Lady, but every week, as Whiskers stole doughnuts from dinosaurs, was stopped by the police, or generally misbehaved, Lucky Lady would often save the day, once by socking Whiskers with her powerful paw. Whiskers and Lucky saved us from second grade. 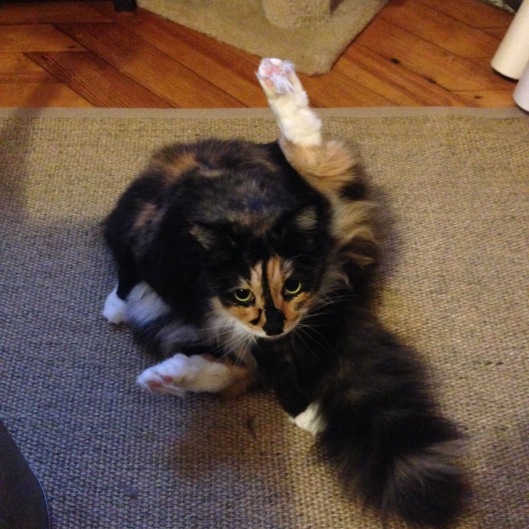 Found feral, she was never fully tame, though she made decisions about not venturing outside in the snow again (after a night out in the cold) and she learned not to jump against the screens trying to get at Whiskers (she fell out of the first floor window once). We brushed her, and she adapted after the first few times, when she hissed and bit at the brush. She loved catnip, and eating feathers (I learned to keep my millinery supplies in a cupboard), and chewing wool (I learned to keep my wool in a cupboard). She learned, and we learned, and she is ours and we are hers. 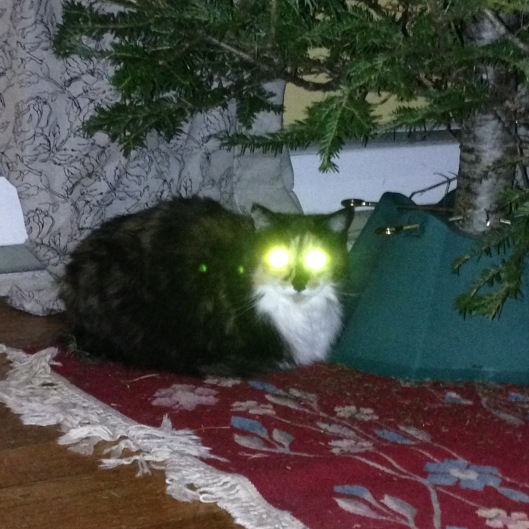 One year, she got lasers for Christmas.

Now that she is terminally ill, we do what we can for her. She eats Trader Joe’s tuna for cats because she can keep it down; she drinks CatSure (she prefers premixed to powder mixed); we give her catnip. Sunday night she did not know what to do with the catnip, and ultimately fell asleep in the catnip without enjoying it.

Socks, checking on the Time Machine

Her adopted sister Socks (the one-eyed, wobbly, film noir-loving, Nazi-hating tabby cat known as the Howling Assistant) died last summer. Lucky Lady will die soon, too, though we will keep her as comfortable as we can as long as we can. It’s hard to say how long it will be, and I feel wrenched and torn as I contemplate what Lady must endure and how much I will miss her, the last living connection to Providence I have with me in Alexandria. She’s more than a symbol, of course; she’s an independent being. But when Lady dies, a little part of me will go, too, and the past, and New England, will seem even farther away.