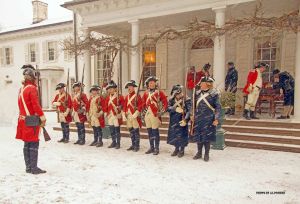 What if they had a reenactment and there was no battle? Can you really interpret military history without a battle?

Why yes; yes, you can. And you can do it well, engaging and exciting visitors and interpreters alike.

Last Saturday, Princeton was under British occupation once again, as we recreated the winter of 1777 this past weekend. I joined the planning for this  back in October– I double checked– and it really started months before that. Many hands (and imaginations) make events like this work, but for me, the most exciting part was helping to produce an essentially civilian day of programming that interpreted the Revolutionary War in New Jersey. Yes, there was “a musket thing” mid-day, but that wasn’t the focus of the action.

The ink froze, but oaths were to be signed anyway.

HM 17th Regiment made their base of operations/occupation the porch of Morven House (formerly Richard Stockton’s residence) while the populace of Princeton attempted to go about their daily lives in Palmer Square. Quakers found themselves pressed to sign the Oath of Allegiance to King George III, despite their protestations that they could not take sides in a war. 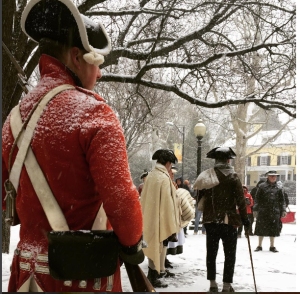 Quakers and citizens, surrounded by occupying troops, listen to the officer’s exhortations. From instagram @thebentspoon

Some citizens seemed all too eager to sign the Oath, though rumor had it that one had previously pledged his loyalty to the rebel cause. (Sources have it that by the summer of 1778, this miscreant will be exacting revenge upon his neighbors as a Retaliator.)

Vignettes were drawn from documentation like the Brief Narrative of the Ravages of the British and Hessians at Princeton, 1776-1777:

“Triumph on that Days Victory the noted third day of January 1777 when they took two men and a Woman that could not stand Prisoners one of the men being much younger then the other & haveing shoes on made his Escape The Woman being unable to march they left her so they had in truth none from Princetown to Crown their Conquest with but the poor Old Captive without shoes. This is the Renowned Victory Obtained that day near Prince- town Which (it is said) is amply set forth in one of the New York newspapers 1 to be a Compleat victory obtained by the Regulars over the Continental Army so far as I have Related is true according to best Information that I can get, And so far I agree with that news Paper that the Regulars gained a Victory over two men and one woman. …. In takeing these three Prisoners they violated three of their Officers Protections for the two men had Each of them one, and the Womans Husband had another Besides they are all Reputed Quakers…” (Brief Narrative pp 18-20)

Lance Corporal Becnel proved himself in the afternoon. Photo by Al Pochek

The constant snow kept our shoes on, but goods were stolen, occupants assaulted, soldiers beaten, prisoners taken, and justice served.

Hardy visitors followed us from Morven to Palmer Square and back, and one of the most exciting moments of the day for me was when a visitor said, “Wow, so the [British] soldiers didn’t really protect you, did they? You couldn’t count on them to keep you safe!” This seemed a pretty good summation of our interpretive goals:

I count that a major win for living history.