Here’s a question: what about those linen bonnets? Am I making that up?

As it happens, nope.

Linen bonnets appear in ads from the 1760s to the 1780s, sometimes described as white, and sometimes as check. There’s even a white diaper bonnet! The thing to remember is that so far I haven’t found these in New England, but that’s because I’m using runaway ads, and those are far less common in New England. There’s plenty of check linen fabric in New England– but if there were bonnets, those references may be in inventories I haven’t had a chance to dig into.

Another possibility in the regionalism of linen (checked or white) is climate. A friend and fellow blogger sees the linen bonnets in coastal North Carolina, which makes sense in terms of weather. It’s warmer and even more humid on the North Carolina coast than it is on the Rhode Island coast, and I’ve found linen to be much cooler than silk. This same regionalism may apply to what we see from Philadelphia to Frederick, Maryland. 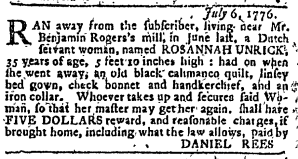 Maryland Journal, August 21, 1776. I love this one because Rosannah is as tall as I am!

As I tabulate data, trends will emerge; as it happens, I’ve already seen that half the bonnets I’ve entered are linen and half are silk. Those references are from the Mid Atlantic and coastal South, with only one from Rhode lsland (and that a “blue cloth” bonnet), so there’s lots more data entry to come. For the moment, though, it’s safe to say that a checked, white, diaper, or dimity linen bonnet is documentable from 1758 to 1780 from Philadelphia south to Wilmington, North Carolina. The fiber persists, but shapes will change.