Sara Hough’s date of ca. 1805 piqued my curiosity and Cassidy was suspicious, too. So I went looking into Paul Sandby a little bit more.

Many of us know him for the sketches and watercolors of working people in mid-18th century England. They’re oft-used references for people doing Rev War reenacting as they’re full of the kinds of details seen in the watercolor of Sara Hough. I hadn’t thought of Sandby for later 18th century references, which shows how little I was thinking.

Thanks to the 18th Century Material Culture Resource Center, I found the Sandby “People and Places” presentation, which led me back to the Yale Center for British Art, and this image of musicians, horses and women. There’s no date in the record, though the presentation calls it ca. 1785. There seems to be a series or portfolio of Sandby sketches similar in size and type from about 1785, so it’s a reasonable assumption…with the usual caveat about assumptions, but no aspersions on the compiler of the presentation. 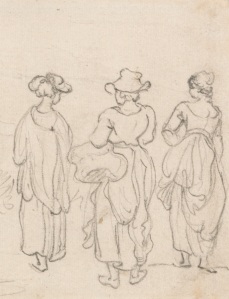 Let’s look at a detail of the women in the drawing. Their waists are higher than we see in earlier Sandby drawings, and their profile slimmer, more classical, particularly the figure on the far right. Her bodice looks to me like a late 18th-century bodices. 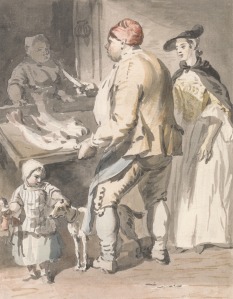 Sandby had the skill to depict clothing with minimal gestures, as he does below in A Fishmonger, part of the London Cries series.

It’s that circa that gets you. I believe it for the ca. 1759, all the way. The figures fit into the visual continuum of Sandby’s mid-century work as I know it. (You’ll just have to trust me that I have a visual memory, and that, for once, the years of art school matter.)

And I kept wondering if he really had worked late into the 18th century, and then I found this:

Again, no date, but there are distinctive markers to tell us this is post-1780, even inching to the early 1790s. The waistcoats on the adolescent boys are shorter and double-breasted. The shape of the boy’s hats has changed: these aren’t cocked hats, and they’re not soft round hats. But look even closer and you’ll see the ties at the knees of their breeches, very typical and fashionable for the 1790s. All this before we’ve even gotten to the woman! Look at what she’s wearing: that’s certainly a plausible ensemble for 1794, isn’t it? The waist has moved up, the skirts are lighter, likely mull or muslin, and the skirt of what I interpret as an open robe, much like Sara Hough‘s, is trained on the ground. If this is a Sandby drawing, which I don’t doubt, then I think we definitely see him working into the mid-1790s.

And just for one final kick, I checked the Met again, where they have a Paul Sandby drawing dated 1798-1799. I wonder…but the coat collar and waistcoat might have it.

Sandby, Group of 4 Children and a Dog, MMA

I’m still not sold on ca. 1805 for Sara Hough (why no ‘h’ on Sara when the drawing is inscribed by Sandby, “Sarah Hough…”?) but I’d endorse 1795. The tricky part, as always, is the circa: so much depends on how a museum interprets ‘circa.’ For some, it’s 5 years either side of the date; for others, it’s 10. When I see a circa date, I get skeptical, and start doing math.