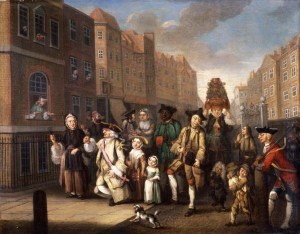 I find myself involved in an event scheduled for August 10 in Boston, though I know this could go awry because I worked for a number of years with DC, the organizer of this extravaganza. He’s got a style all his own, and for a taste of the madness, you can see him here (~5:26) with unmistakable and inimitable mannerisms, at Louisbourg.

While the Adjutant is arranging and training the militia, the event still needs civilians, and as the interpretive consultant, my task is to create the context of the day and hammer into DC’s head that when organizing something like this, you can hardly over-communicate, though having been on the receiving end of his phone calls, actually, you can… but that’s where I come in with the editor’s sharpened pencil and cut, cut, cut.

Mr S has signed right up for this event, though he lacks suitable garb, and thus it will soon be time to break out the wool broadcloth. I really liked Sharon’s waistcoat-conversion suggestion, and happily Wm Booth had a lovely dark-green wool remnant of just enough yardage for a skinny man’s frock coat that very morning. Add the brass buttons in the stash, and I thought we were off and headed for 1770 with a regression to 1763.

Except… in doing more looking at 1760/1763 images, I began to wonder if it was better to beat the green linen into an earlier coat, consider it a lesson learned, and move on, since it is only a one-day event. (I saw some small remnants of that same green linen in the Adjutant’s stash, and perhaps I can get them for cuffs.)

My logic is this: it can be tricky to walk a coat backwards in time, especially in sleeve width, and Mr S is in serious need and want of a lovely coat for Battle Road. (Except yes, heh heh, he needs it by July 14 for an event at Washington’s HQ in Cambridge. There’s not even time for gnashing of teeth!) I don’t think it means more sewing, really, it only means penance with alterations and begging for fabric scraps. It also mean focusing, and letting the Monmouth-acquired cuts on my fingertips heal.

Mr S will be just one of a number of men who will be militia in the morning and civilians in the afternoon. In thinking about the Boston street of 1763, I’m reading the Boston Gazette and Country Journal (which DC had not done beyond the main articles…) and looking at images from London. Maybe the scene won’t be as chaotic, since it is a happy celebration, but it needs to be busy, and populated with men, women, and children of various ages, races, and class levels. There’s a nice way to search for “street” at the Yale Center for British Art, and you get a sense of the crowds and busy-ness of the 18th century street.

To that end, I have asked my silk-gown friends, and I plan to be the cherry seller. (I should so like to have that done by Sturbridge to acquire some patina, but doubt I shall.) For the Young Mr, I see runaway apprentices as a possibility. In the Boston Gazette of August 8, 1763, There is a 16 year old mulatto fellow, “large of his age,” who had on “a brown camblet coat with red lining, a white linnen and a mixt colour’d flannel vest” as well as a blue great coat with yellow metal buttons and leather breeches. There won’t be leather breeches by August, but a camblet coat lined in red may be possible.

2 thoughts on “Citizens of Boston”