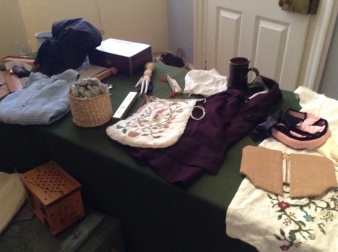 Several weeks ago now, Sew 18th Century and I went up to Boston to be part of the People of 1763 event at the Bostonian Society. I hope she knows how grateful I was and am to her for her help and thoughtfulness in preparing an excellent table of examples. The infant’s stays were, by far, the most interesting thing people found all day. (While Sew 18th Century ate her lunch, I did hear about how a woman from California was appalled there were not more Boston terriers in Boston, and when I suggested that perhaps the financial district wasn’t where you’d find dogs, in general, but that the Common and the Garden might have more dogs and terriers in particular, I got to see cellphone pictures of her Boston terriers. I’m still intrigued by this conversation.) 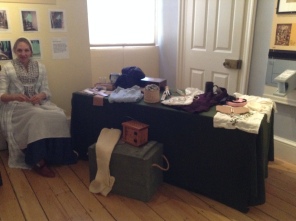 But all day I fought with my gown, which proves you should not wear something in public until you have fully tested it at home. Finally, packing out, the fronts and the straps separated with a flourish of leaping pins, and all decorum was lost. I began to wonder about exactly what had prompted earlier male compliments on the gown, especially when I discovered the loose stay lace at the top of my stays…and then found the lace had come untied and was unlacing itself from the bottom up! And of course, while outside looking for my husband (reportedly carried off by bears), my hat and cap blew off, and since the gown was coming undone, they were all the harder to catch, adding to the wardrobe mayhem and my discomfiture.

I have since re-looped and double-knotted the stay lace, so I hope it will not come undone again at the base (and of course I had no bodkin handy that day). But still, there were other, “bigger,” issues, to be explored tomorrow. 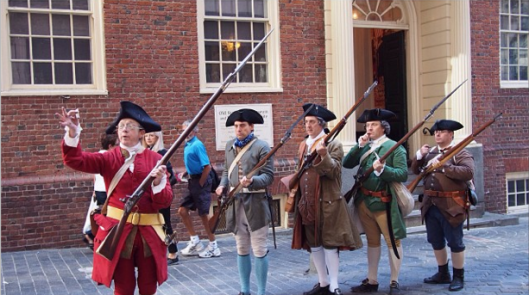 Demonstration at the Old State House

That’s last Saturday, outside the Old State House, for the “People of 1763” event. Sew 18th Century and I provided a material culture/ladies’ clothing presentation in the Hands on History room. The guys drilled outside, had their photos taken, and represented the militia. The Bostonian Society had over 1200 people in the museum last Saturday, which is a pretty respectable number for a small place. It can also leave you feeling somewhat overrun. (All my photos turned out fuzzy: all I had was a shaky hand and my phone. Chalk it up to needing more sleep.) 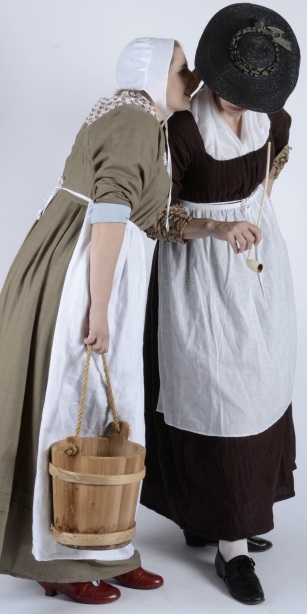 This coming Saturday is What Cheer Day at the John Brown House Museum, and my sewing and research and house prep continues, if not apace, at a steady pace. Mannequins have been put away, furniture moved, and the accents practiced. By the time we were trying to say, “These are not the droids you’re looking for” with 18th century Maine vowels, we knew it was time to go home. Why this and not “I’ll put the kettle on to boil,” I do not know.

It’s still hard for me to get a handle on my character, and not so much her background as her attitude. I’m not very good at being servile or lady-like, which is why, if I’m still working for the Browns, I must be a relative of some kind.

My husband’s dead; he died in 1788, not long after the Browns moved into their new house; wounded in the Revolution, he never quite recovered and despite the best ministrations of Dr Bowen, Mr S succumbed at last. My son, now 18, was born not long after Mr S returned from the war (Mr S enlisted ‘for 3 years or the war’). Curiously, the chaplain of his regiment is also the pastor at the Congregational church in Providence.

I am a nearly non-observant Anglican, but I recognize Reverend Hitchcock, and know the work he has done in support of free public education. Mr Brown and his brother disagree on many things, but they have at least agreed upon the importance of free public education. My son and I can read, but if Tom had been better educated, perhaps he would not have gone away to sea.

Next I have to think about my cousin from Newport, and the Brown women, and what I think about them.

And there’s still the small matter of sewing two hems, three buttons and three button loops and hoping the whole business will fit properly. At least my friend finished my cap for me. I get just so far, and then I hate caps. 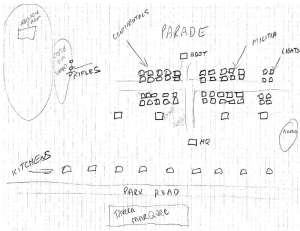 Rough Sketch of the US Camp

In more exciting news, there’s a map of the American camp so we’ll know where we’re stumbling to in the dark. (We can’t leave town until about 3:00, when the Young Mr will finally be released from school.)

We’ll be with the Lights, in two of those proposed eight tents, near the oval designated “horses.” With a sketch map in hand, we won’t have to remember Lochee while grappling with mallet and flashlight. Well, not too much, anyway.

The coat is done, and while I would have had time to make another for the Young Mr, I took a three-day break from sewing instead. The finished size 40 fits him, in any case, so if there is a spare, he can appear in brown and green with the rest of the company. Now that he’s swimming two days aweek, I don’t epxact him to stay a size 40 for long enough to justify his own hand-sewn, two-events-per-year-max coat…yet…

For me, the next few weeks will be spent sewing for What Cheer Day and thinking about the “People of 1763” event in Boston. Sew18thCentury will be joining me for that, as I play her maid. We’ll be at the Old State House in Boston where I know a very lovely Grenadier’s Cap is on display.

First wearing at the Martin House in Swansea, MA

Most of what I’ve made I’ve hated. It hasn’t been perfect enough. This is pretty much how it works when you are learning something new: your eyes outrun your abilities, and you have to keep working away to build the skills to match your dreams. I’m still building skills, but I have at least managed to get to a place where I can just about trust my ability to make something I can stand to wear.

I’ve also learned that you are likely, in the process of making a gown or what-have-you, to hate the garment in question. My friend hated her Green Gown of Doom, but when it was done and on she liked it. Midway through the Cherry Seller Robe, I hated it, thought it a failure, and wanted to quit.

Persevere: the moment when you are most frustrated is often the moment right before you figure out the thing you have been trying to learn. 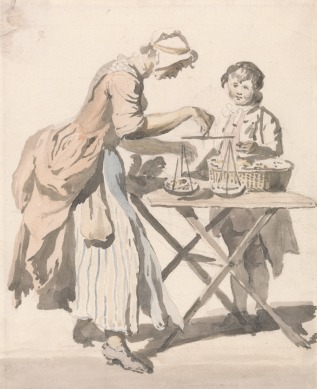 The story behind the Cherry Seller Robe is that I plan to wear it in Boston on August 10, so it is very old fashioned. Based on Paul Sandby’s Black Heart Cherries watercolor, it is open with robings, and made of Burnley & Trowbridge’s wool-cotton “Virginia cloth.” The gown fits in a “v” on the front, and to my eye, has a 1750s look. (I have not finished the cuffs, attached lacing strips, or finished the stomacher; once lacing and stomacher are done, it will fit more like How Now Brown Gown.)

For August, I’ll make a white linen petticoat and a tan “Virginia cloth” petticoat, a blue linen apron and, I hope, a new lappet cap. (I had one cut out around here somewhere…) The yellow and blue or yellow-blue-white striped petticoat may have to wait; I have a lead on some in a stash, but no sightings yet.  Making new, lighter-weight petticoats is in anticipation of August weather in downtown Boston. I’m still debating about the kerchief, which seems to be a solid color with a striped border; I may just wear the one I have.

Yesterday was hot and windy, with a chance of hat failure. All in all, a fine day to sew and wear wool. 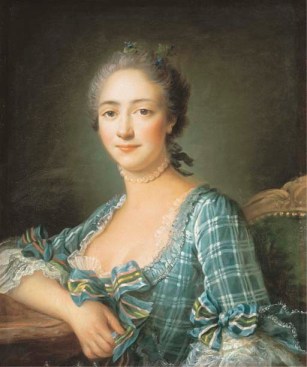 Boston keeps me busy, along with a few other things, but as a means of wrangling the project information, I made a free website. You can visit it here to see how it progresses. Yes, I could have used wordpress, but this navigation seemed better for the intended audience. Of course, all this just makes the list of things I want to make longer, for example, this lovely gown.

Do I care that she’s French? No, all I care about is that she’s plaid, like the oyster seller. Somewhere I have brown and white cotton plaid…and a long list of other things to make!