Though it may seem contrary to previous posts, there are times when I really believe less is more, and that’s when we’re out in the field.

Each year I’ve tried to improve our kit and impression by replacing or removing items, mostly to increase our accuracy but also to reduce what we carry. The less we have to carry, the less I have to pack and clean and think about and the more I can think about the history. This iteration of “What the heck can I quit?” was prompted by reports of a conversation with someone I respect, which caused me to rethink what we were hauling along and how I could change it.

The Box of Doom with the Pitcher of Inaccuracy

We have stripped away most of what we used to bring for the comfort of the kid; as he has grown up, he’s needed less to feel comfortable and “at home.” We traded ground pads for bed sacks* very quickly, and we never had any iron to begin with. I’ve tried to keep within seasonal and historical cooking guidelines, but the largest hurdle and heaviest literal burden is the wooden cooler box.

Feeding the Young Mr is a tricky thing: he likes what he likes, and he likes a lot of it. What he likes are carrots, apples, and meat. There’s some swapping that can be done with seasonal fruit, but the largest hurdle is meat: if I can scrap fresh, needs-to-be-kept-cool meat, I can leave the cooler box at home. (At this moment, several gentlemen are suddenly feeling empty inside, with a taste of ash in their mouths. Dirt stew, boys: it’s coming.) 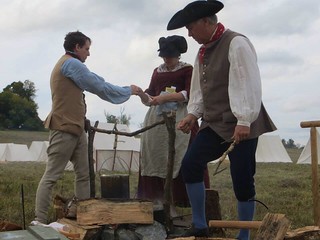 No iron, but what goes into the kettle?

I had gotten about as far as pease porridge when, in a completely costuming context, I came across links to The Sewing Academy.

The squeamish and childless may writhe at the handouts on dealing with nursing babies, hygiene, and winter clothes for children, but these Civil War resources have utility for all of us trying to be more accurate in our portrayals of the past.

I had not thought about packing frozen meat and storing it underground, and though I like the idea very much, it will not suit in cases where digging is forbidden. But it is certainly a way around the cooler box, and one I’m willing to entertain. (Check “No Refrigeration Required.”) “The Progressive Questions” help sketch out a responses to a variety of situations.

“Quoth the Mavens” contains this excellent definition: A truly progressive mind-set tries to figure out the logic of what was indeed used, rather than rationalizing modern logic into a period situation.

There’s nothing more to add to that pithy statement, but a renewed sense of dedication to accuracy and “less is more” thinking.

*As accurate as my attitude would be after resting arthritic bones on the ground, no one really needs to experience that. Call it a safety measure.

3 thoughts on “Less is More”