I don’t know about you, but the end of winter often seems harder than the beginning: will this ever end? The snow begins to melt, the dirt turns to mud and you’re walking on ice suspended in pudding. It’s claustrophobic.

The weather turns here and the lid finally comes off the sky and reveals that blue above and I think of the vistas of the west, the fields that open up along the rivers of the center of this continent, the fields rough with corn stubble punctuated by trees that pass your car window like drum beats in a song, so regular.

I wonder about the people in the past, wonder what they thought and knew about. Of course it was different for the uneducated and the poor then as now, but if you were wealthy, oh, the places you could go. 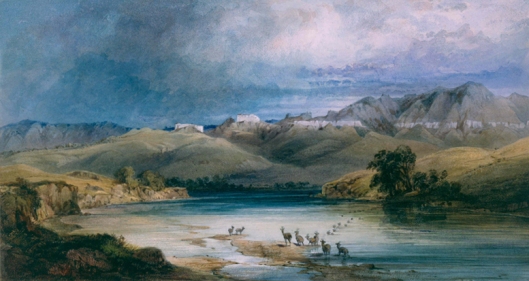 At the dawn of time back in Missouri, I never had the pleasure to hold but I did get to order 8×10 color transparencies* of things as wonderful as the Karl Bodmer watercolors of the trip he took up the Missouri River, and George Caleb Bingham’s Fur Traders Descending the Missouri.

Art history classes will teach you to recognize painters and images, styles and eras, but they won’t teach you the kind of seeing you can only get by being in the same place at the same time in the same light.

Far from the wide Missouri, I have to be content with images in books and the internet, but I can tell you from looking: Bingham got it right. The sky really does look like that above those rivers and plains; the light is rosy and grey at once, the river swift and glassy. I don’t know how it works, I only know how happy it makes me.

Come, spring: bring us the river and the light.

*Yes, and we had the printers run separations and then FedExed them to other museums for approval. Can you imagine!

And, if you’re handy to the place, the St Louis Art Museum (SLAM) is having a Bingham show.

2 thoughts on “Lighting Out for the Territories”