I think about three or four things most of the time: food, sex, museums, and clothes. That seems pretty adequate, but from time to time I am forced to consider intersections between these rather broad topics. The intersectionality of clothing and museums seems pretty obvious: from accurate costumed interpretation to proper packing and storage, easy. Food and museums will be much on my mind in the coming year, as we work on “Relishing Rhode Island,” and I’m continually harping on how eating locally and seasonally is the core of eating historically. Sex and museums is a little harder (yes, I know about the Museum of Sex), though one gets a chance even in a historic house museum, and really, it’s not just about the act: it’s about the feels. 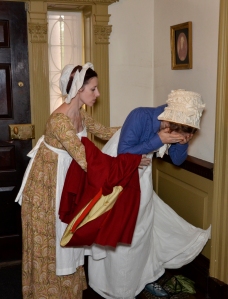 Mary assists Alice in the hallway as she prepares to face her mother. Photograph by J. D. Kay

In the main, I am not particularly good at the feels aside from some very hands-on experience with anxiety, but a number of things have coalesced recently to make me reconsider the intersection of emotions, museums, and history.

Hamilton is one, and if you read this, you probably watched the Hamilton’s America documentary  on PBS last Friday. If you didn’t, go do it now. Really: I can wait. And here’s why:

In the thinking I’ve been doing for some time about Hamilton,* I’ve reached the conclusion that what makes it so damn good (aside from the brilliant writing) is how Lin-Manuel Miranda has captured the emotions. The quotes I wrote down from the documentary are about emotion and drama, because I’m looking for them (confirmation bias for the win) but here they are:

“I got into the history through the characters”

“Research is over and you write the character defined by history”

“Write the parts you think are a musical” 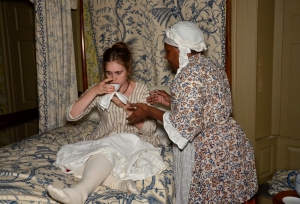 What is a museum exhibit but “the parts you think are a musical?” While Our Girl History struggled with being Alice (I know a bit about the part where your ego gets connected to a character), she had to portray a character defined by history, but also by emotion. And in thinking about Hamilton, about What Cheer Day, and about the exhibits that give me pleasure, and art that brings me joy, I have reached a couple of conclusions.

I believe that museums, where we currently set educational and interpretive goals, and increasingly experiential goals, need to begin setting emotional goals for their programs and exhibitions. You could argue that experiential and emotional goals are the same, but I disagree: I believe that interpretation helps define the experiences that create emotional responses, and within the intersection of experience and emotion we will find the educational goal revealed, because we are always working within a content-driven context.

I also believe the reason gun-based reenactments retain their popularity is their easy emotions. “Boom!” is exciting anywhere: there’s an immediate reaction of shock, surprise, a mild fear, and excitement. Traditional reenactments have those “boom!” emotions embedded within them, which is how they retain their potency. Until we locate the emotion within the everyday– and trust me, it’s there– we will not see the primacy of non-military reenactments and living history.

*Yes, I was aware of it when it was in previews at the Public Theatre. I am *that* kind of hipster, but really, it was because Oscar Eustis went from Trinity Rep here to the Public and there’s a PVD-NYC theatre connection.

6 thoughts on “What Cheer Day: Emotional Goals and Historical Content”