This guest post was written by Sharon Burnston. Sharon and I will be co-teaching an interactive workshop on first person impressions this June. “Exteriorizing” is an important part of developing an impression that works not just to represent a character, but to tell a story. Part II will appear tomorrow.

The first time I was ever “abducted” at a living history event was during an F&I scenario 35 years ago. I was dragged off into the bushes by scary looking strangers, and it was all very well researched and convincing.

But one thing I realized, upon reflection afterward, is that a really accurately portrayed scenario isn’t always in all ways the “best” scenario, for the participants or the public. In real situations that are terrifying, the usual physiological/behavioral responses are those described as Flight, Fight or Freeze. That’s what real people do when that sort of thing really happens. At the time I was abducted by “the French and the Indians”, I put myself into the moment, imagined how I would really feel if it were actually happening, and I froze. I portrayed terror so well, my abductors looked at me oddly, wondering if I was okay. But y’know what? The spectators, standing 30 feet or more away, couldn’t see my face, couldn’t hear my shallow breathing, and they got nothing out of it.

I realized that I had actually failed to do justice to the interpretive moment, I should have done something less lifelike and more communicative. I should have screamed for help, in detail, loudly, and at length. In real life, this would have been a risky thing for a captive to do, but in a reenactment interpretive setting, it would have been useful. I mean, I knew precisely why my character was terrified, but did the public? If I had screamed and carried on, it would have given me an opportunity to put into words what the 18c abducted woman knew about what was going to happen to her. It would have been a better scenario in terms of educating the public if I had, in a word, exteriorized what my character was feeling into words, for everyone present to hear.

The problem with my having learned this sort of thing experientially and so long ago, is that I tend to blithely assume that other folks whom I regard as skilled 18c role players also know it, because to me it is by now so obvious. 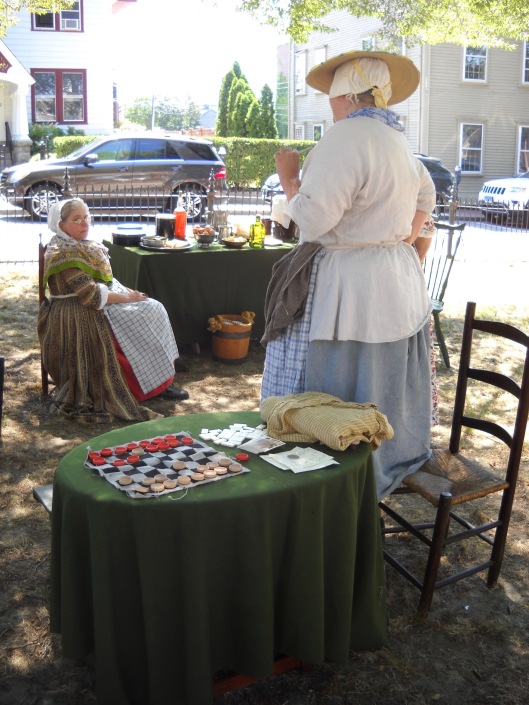 Last summer I participated in a brilliant re-creation of a different kind of abduction, a reenactment of the British naval press gang that abducted American sailors out of Newport RI harbor in 1765. Over 60 of us from all across New England worked hard for months to research and develop our impressions in order to make this event as convincing and accurate as we could. For the most part, we succeeded magnificently. But I came away dissatisfied and I think some of the public I talked to did also. That was a helluva scenario, meticulously planned and carried out, and we did it so well! But I think we could have done it one or two notches better, and here is why I think so.

First person role playing has far more of theater about it than perhaps we living historians care to admit. Drawing upon theatrical strategies can allow us to better communicate our knowledge to the audience, by exteriorizing our characters’ thoughts or feelings into dialogue the public can hear, even if doing so might slightly violate the strictest historical purity of our role playing. After all, don’t we claim to be doing this in order to educate the public?

The strategy I have in mind is the collaborative trick referred to in improvisational theater as “Yes, and”.

“Yes, and…” refers to a basic concept in improv theater. If a participant throws a gambit at you, don’t shut it down. Accept it, whatever it is (“Yes”) and then add something of your own (“and…”) to expand on the idea and keep it going. “Yes” means being receptive to the contributions of others. “And” means offering something back, to further the collaborative process.

How would this notion apply to a living history role playing scenario? Stay tuned to find out!

2 thoughts on ““Exteriorizing,” or, Showing the Past: Part I”