December: when the year ends and begins again, a time when historically, for many Scandinavians at least, there was no spinning or winding, lest the world stop turning. No one wants to be stuck in mid-winter forever. This is the time when most of us look back, wondering what we accomplished this year, what it means, and begin to think about what we want for next year.

For me, this year has brought changes: three jobs, and my own business. I’m fortunate that I never stopped working. But I also never stopped working, and that keeps catching up with me. The days are grey and wet, and now that I work (part-time, for a few months more) in the district, I see winter creeping into the city as well as the suburbs, with all the signs of the changing seasons. 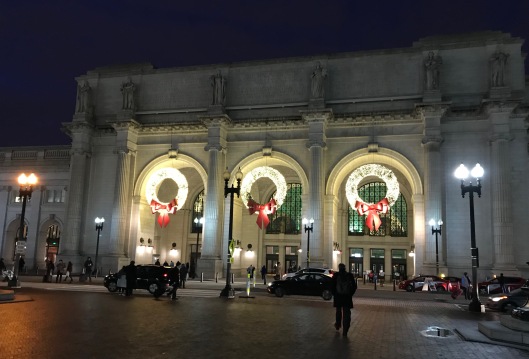 It’s not just sunsets, increasingly bare tree limbs, wool coats, or holiday lights as I walk to the train station, it’s what I smell. Some nights on Capitol Hill, it’s steak. Some nights at Huntington, it’s pizza. But even on the mornings when I collect the office mail from the post office, the terrazzo floored lobby with its glazed bronze doors smells like the office building lobbies of downtown Chicago in the 1970s and ‘80s. What was that smell: floor cleaner and metal polish, paper, and the seeping damp of melting frost? As difficult to describe as it is easy to remember, where I work now smells like where I grew up.

The landscape is similar, too, rowhouses on one walk to work, and office buildings on another, and, as I walk past the station proper, pigeons and homeless people. That, in particular, reminds me of Chicago, and a boy I knew from Eastern Europe.

He drove a cab with his father, but with me, he walked the scabby downtown streets eating croissants bitter with chocolate that turned sweet in our mouths as we kissed down the stairs from the cheapest seats at the Auditorium, sweets we carried in our pockets to share at intermission when we crept down to better seats not sold for that matinee performance.

I met him at a punk club, but he alone of all my friends loved ballet with me, he alone knew the ballerinas, the ballets, the composers.

He was tall and unforgiving.

“Your parks!” he said, “Dead pigeons and dog shot! People sleep in that!” and I had no answer, for he was right. He could say nearly the same about my walk to work today.

I think about this as the decorations go up, rituals are re-enacted, and we look forward and back at once. We’re our own private historical societies, editing our collections, interpreting our lives in ornaments, family photos, dinner menus, and table settings. Everything is different for me this year, even when I set the table with the same plates I’ve used for 25 years. And I have no idea what it will mean.

Next time, a look back at this year with an eye to next year’s aspirations.

1 thought on “The City in Winter”