Since I moved to Virginia, I have made more use of the local public library than I have since I was a kid. Not only do I go there to write when home is too distracting (some tasks need to be finished in a cat- and fridge-free zone), but I go pretty much every week. Traveling to DC gives me ample time to read, and I can finish a book or two every week just reading on the train. Among the titles I read this year are some that might interest readers of this blog (and could make a good last-minute holiday gift if you need some ideas). 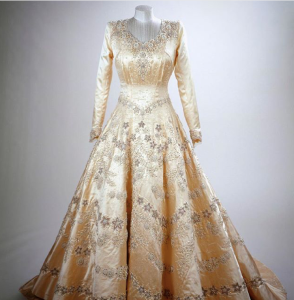 The Gown: A Novel of the Royal Wedding by Jennifer Robson (William Morrow, 2018) was a little outside my normal range. I don’t usually read historical fiction and this veered into historical romance fiction and that’s just not my thing. And yes, if you read the reviews on Goodreads, those folks make some valid points. I did read the whole thing, but what really held my attention were the descriptions of working in the couture houses of Paris and London, in particular at Norman Hartnell. Hartnell’s gowns for the queen were marked by detailed embroidery. The wedding dress was made while Britain was still under rationing, which meant that then-Princess Elizabeth used her rationing coupons for her dress; thousands of women sent her their coupons, too, in a curious gesture that is noted in the book. There are some obvious plot twists, and some trite moments, but on the whole, this was a good summer read that got me thinking about the hidden labor that goes into clothing, and ways to make that visible.

Dress in the Age of Jane Austen: Regency Fashion by Hilary Davidson (Yale University Press, 2019). I have one gripe with this book: the type is printed in grey, not black, ink so it is difficult to read at night in bed. Otherwise, this is a solid, comprehensive look at late-18th and early 19th-century clothing. The focus is Great Britain, which is clear from the title, but the information is still useful to those interpreting early 19th century America and Europe. Davidson makes excellent use of written sources along with extant garments, fashion plates, and portraits for a well-rounded examination of what people wore.

The Paper Garden: Mrs. Delany Begins Her Life’s Work at 72 by Molly Peacock (McClelland & Stewart, 2010) I knew Molly Peacock from her poetry, but stumbled across this book at my local library. Mary Delaney’s handwork included needlework and painting, but her most incredible creations were the cut paper flowers she made in the 1770s. Her life story is a good example of the choices that were (or weren’t) available to upper-class women and widows in the 18th century, and of the creative ways they spent their time.

I read plenty of other books this year, from Scandinavian murder mysteries to histories of Roanoke to histories of the suffrage movement, but aside from novels by Colson Whitehead (whichI cannot recommend enough) these three stuck with me.