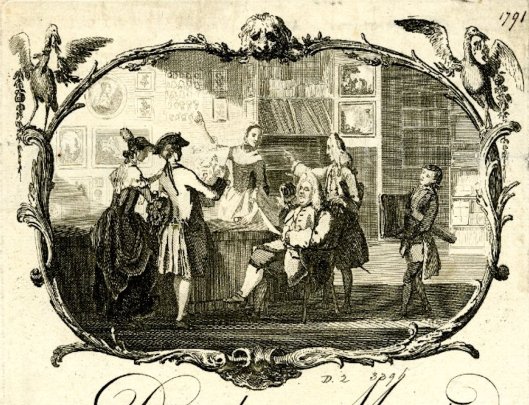 Dorothy Mercier: widow of an artist (and a painter herself), Mercier went into business after the death of her husband, Philip, first as a printseller and stationer, and later as a purveyor of artists’ supplies. Some of what she sold is listed below the vignette of a shop, and includes ‘all Sorts of Papers for Drawing, &c./ The best Black Lead Pencils, Black, Red & White Chalk./ Variety of Water-Colours, and Camels Hair Pencils./…English, Dutch, & French Drawing Paper, Abortive Vellum for Drawing,/ Writing Vellum, the Silk Paper for Drawing.’ She also sold “Continental prints” and “paintings of flowers in her own hand,” a pursuit considered suitable for ladies in the mid-18th century.

Evidence of widows taking over a husband’s print shop in the American colonies in the 18th century is harder to come by–there seems to be less specialization of retail sales in the colonies, certainly compared to London, which is one factor–though printers’ widows did assume their trade in Newport and Williamsburg, among other places. If we imagine a print shop in the colonies, what would we find for sale?

Nicholas Brooks’ ad from the Pennsylvania Packet of June 21, 1773 provides an answer: 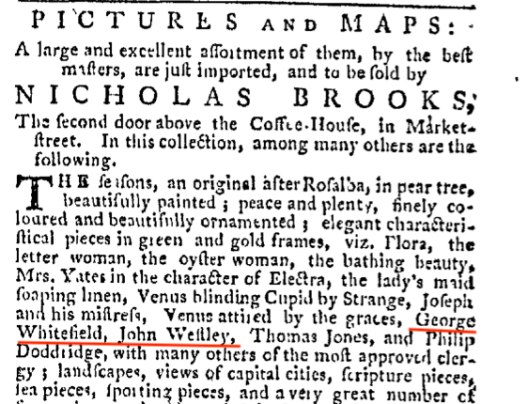 Mrs. Yates in the character of Electra; Venus blinding Cupid by Strange (that’s a print by Robert Strange after Titian, no matter what glorious oddity you may imagine), and portraits of George Whitefield, John Wesley, and other religious luminaries. Whitefield and Wesley were popular Methodist ministers: Whitefield, the peripatetic evangelist, was the primary force behind the Great Awakening, and Wesley, despite his loyalty to King and Church, was an inspiration to the Revolutionary movement in America. 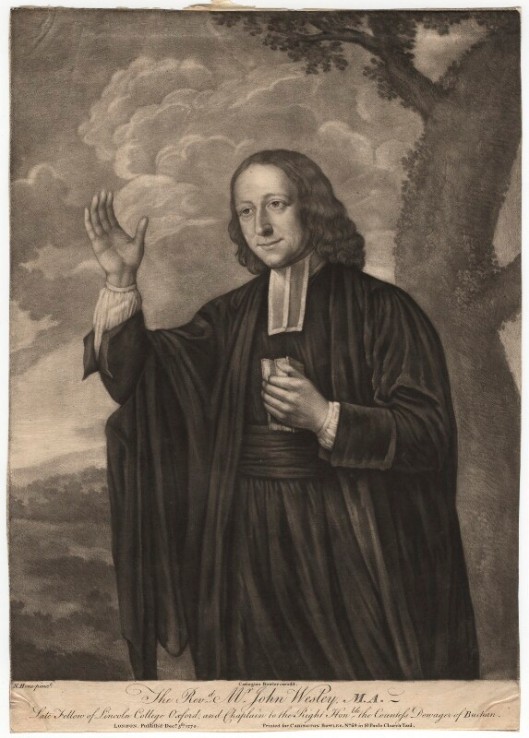 This print of Wesley is one I have seen in person, in a period frame, with a period backboard inscribed “Capt. Wm Noyes 1st Conts” and to be fair, it is one I have spent some time researching, so the titles in that Nicholas Brooks ad– which I was reading for another purpose altogether– were exciting to find. When I think about visual or print culture in the Revolutionary era, I try to imagine the ways in which people encountered imagery, and how they understood it. Wesley– and print shops– are one way I begin to fill in a picture of the past.