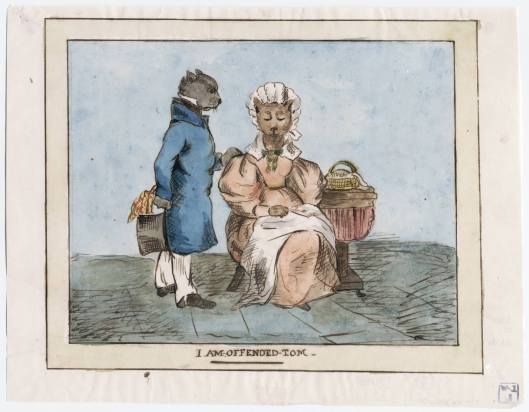 Really, the lolcat is a historic tradition, and it’s research I’m doing when I wander over there on lunch break, honest. So, let’s research this up:

Judging by the lady’s sleeves, we’re probably looking at ca. 1830 for a date- circa gives you so much leeway–but the details of collar and cap are quite nice. Tom has a nice blue coat, straps on his trousers, and a spotted neck or handkerchief in his paw; I think we’re seeing a black waistcoat lapel under the large blue coat collar. The pedestal work table is a nice touch, and not extremely common in collections today.

Whatever has happened between these two (I don’t need to tell you about a tom cat’s reputation), the watercolor does a nice job of depicting a fairly common domestic scene in which only the trappings change. Those anthropomorphic emotions have played out, and will play out, in many a parlor, drawing room, chamber, living room and studio.

Let us hope we all avoid domestic stresses this weekend, except when truly warranted.

Many thanks to Sew 18th Century for the image link!