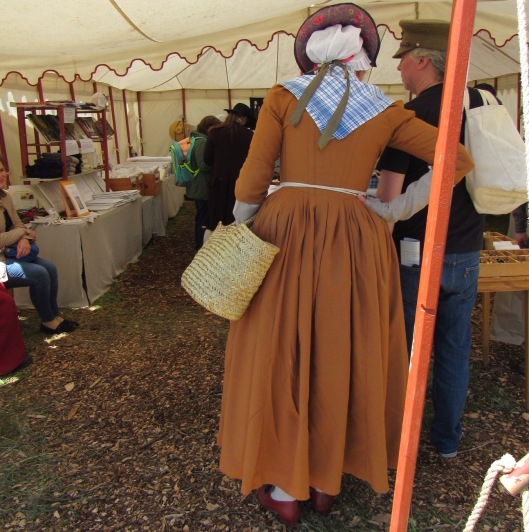 Shopping with a basket at Fort Fred. (photo by Denise Wolff)

The subject of carrying things at living history events never seems fully resolved. There were the fireworks I like to call Basketgate, and in the four years since, more women have been carrying frails than firm-sided baskets. But here’s the thing: baskets were not used as purses. They were used for shopping, and for babies (thanks, Ruth!), not for toting about one’s personal effects. That’s what pockets were, and remain, for. 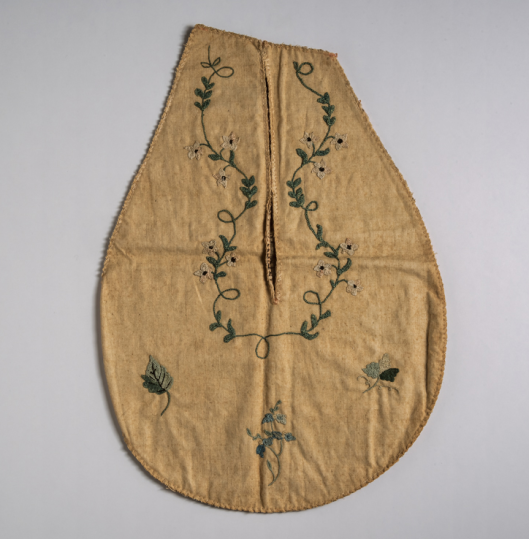 18th century women were not cursed with the tiny pockets of today’s fashionable jeans. No, they had voluminous pockets capable of holding a vast array of items: pocket journals, purses (like our wallets), game tokens, an orange, keys, and almost anything else you can think of. The pocket shown in the image is 15″ long by 11″ wide, which is a fairly typical size, though some were even larger. When I made these, I described them as “large enough for a puppy,” and Facebook wouldn’t let me post them. There is now a full-length book on The Pocket and I look forward to reading it next year, when my ILL will finally request it ($50 being too dear for my budget). In the meantime, the Victoria and Albert Museum will get you started if pockets are new to you.

So, baskets for shopping and pockets for personal things. What else might you use to convey something from one place to another? 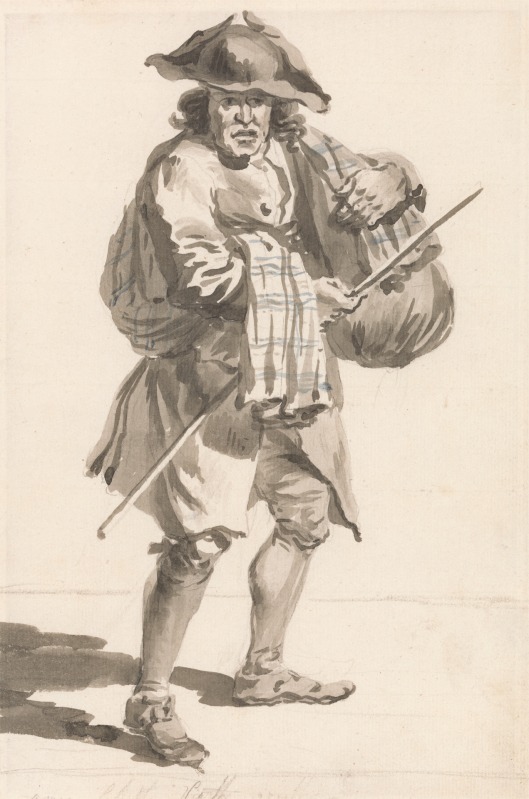 A wallet, of the kind reenactors call a “market wallet,” though that was not the period term. You can read about these in an article by Charles LeCount. The man in the watercolor has a very full wallet over his shoulder, demonstrating the larger end of the wallet spectrum. 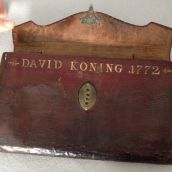 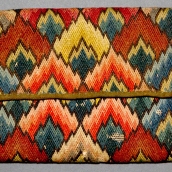 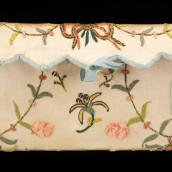 Which one you choose depends on who you portray, and where. Silk wallets or pocketbooks belong to a particular class and the ones in museum collections are often from France. Flamestitch wallets are reasonably common in North America among people with the time to make them. The really neat thing about these is that the patterns show regional differences, so you can tailor your choice to your place. (I lack the patience, skill, or time to really make headway on mine, but in addition to a wonderful custom pattern, I found kits here.) I have a leather one I love, made by this fellow craftsperson and friend.

Your coins? A purse. (we call these miser’s purses, though long purse or ring purse might also be used. The forms originates in the 17th century, and although it is most popular in the 19th century, it does appear in the 18th century. It’s just not common, so no, not everyone should have one. A simple bag will do for those with coins they wish to keep wrangled. 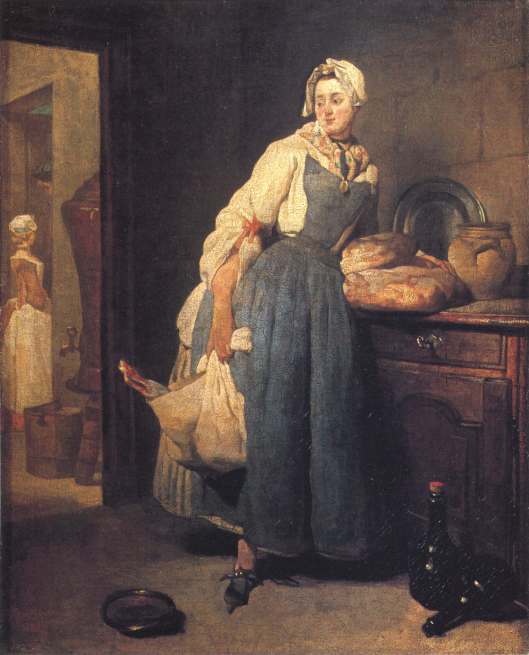 A bag, a pillow case, or even a tied cloth, as seen in the painting by Chardin.

There are lots of options for carrying chattel, lumber, and personal items, and most leave your hands free. But for women, the first place to start is tie-on pockets, and for men, the pockets in your coat. After all, the pocket bags in a typical Henry Cooke frock coat will hold a six pack between them. 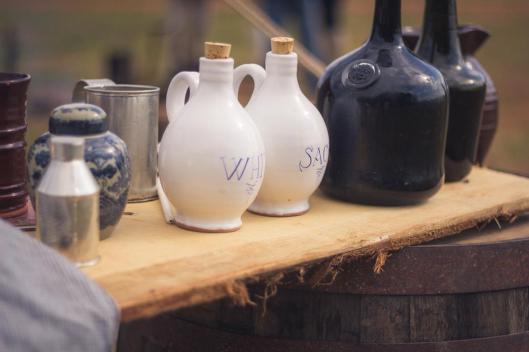 It was a simple set up: two barrels, a board, my frail, and me. (I could really use a wheelbarrow, and a rain deck. At least the rain deck is something I can make myself.) But this was more than adequate to sell luxury goods (rum, whiskey, radishes, and ginger candy) to the soldiers at Fort Dobbs. 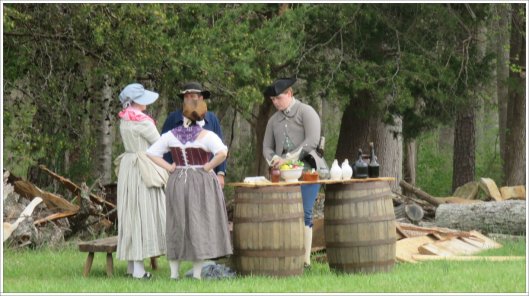 I didn’t think it was hot– which may be thanks to that nifty new checked linen shade bonnet– but it was. Have I forgotten how to take care of myself outdoors in warm weather? Perhaps because I’ve spent so much more time lately on winter events, I’ve let the “drink all the water” mantra slide. It’s clearly time to revive the summer skills, with Monmouth not all that far away. 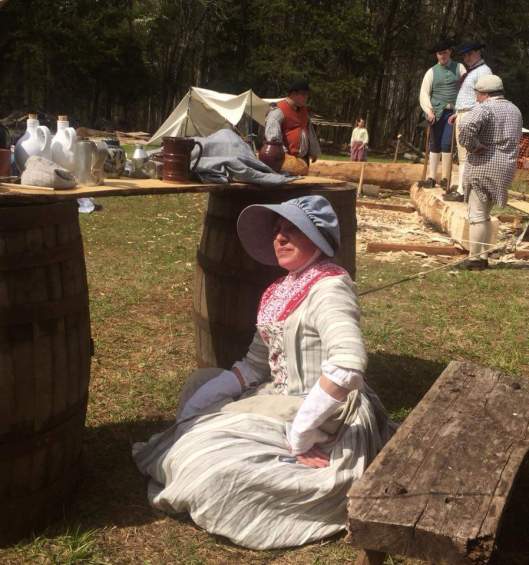 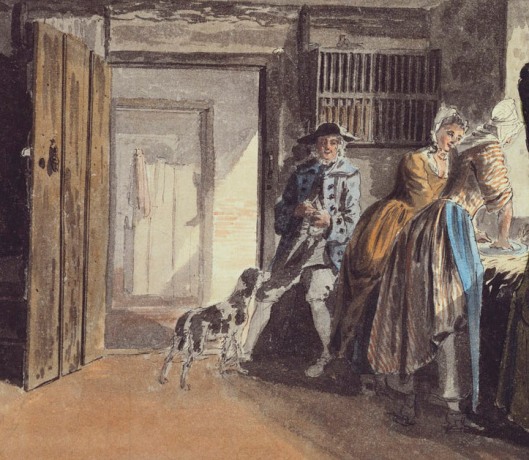 The best times are always those when we are the least self-conscious– not that we can necessarily choose those times. Often they simply happen to us, but if we are lucky enough, we will notice, or someone else will record those moments for us. Last weekend, without even meaning to, we came as close as I may ever hope to get to recreating Sandby images of the Sandpit Gate kitchen. 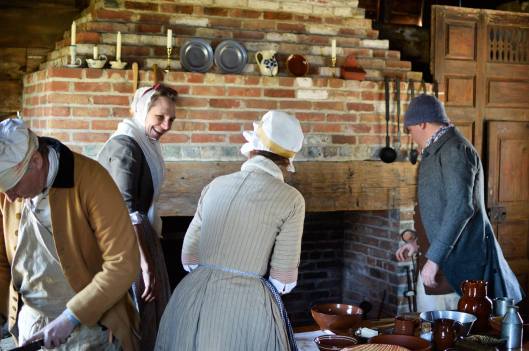 Mistress F commanded the kitchen: I served as her reasonably able scullion, and, with assistance from Drunk Tailor and the company of the B’s, we managed to produce enough food for several dozen people. 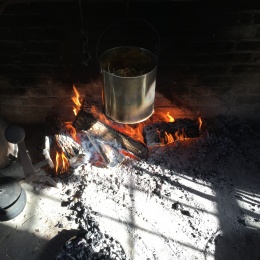 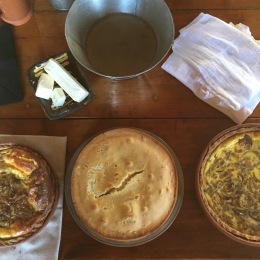 (I baked the pound cake at home, but the egg and onion pies were made on site. I lack historically correct baking apparatus aside from one pie plate.) Cooking in the cabin at Hancock House reminded me of good times long ago— and not so long ago–and how much I enjoyed throwing refuse out a window, and using a soapstone sink. The weekend also brought to mind “show, don’t tell” as it applies to interpretation, and made me think again about how to create more immersive educational experiences for visitors, without becoming ritualistic. 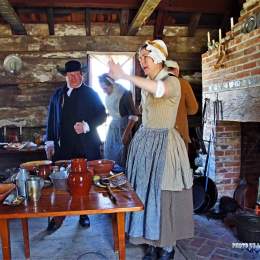 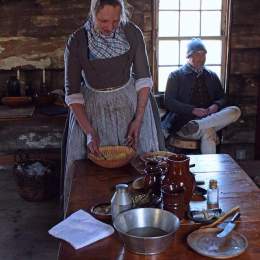 There’s not much time to think those esoteric, grad-school-seminar thoughts when you’re in the midst of cooking, and that can actually be a relief. Instead, better to think of the light, and the landscape, and the time remaining until a pie is cooked through. 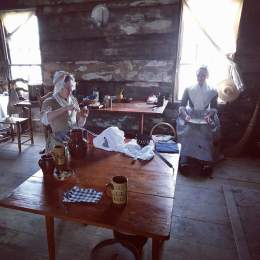 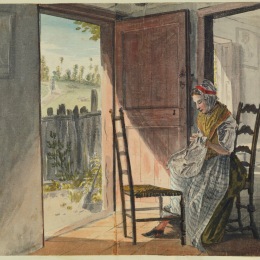 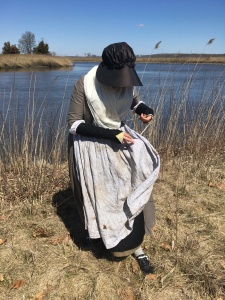 The landscape and the light: redemptive, all that space, the blue sky and the grasses. I thought of The Witch of Blackbird Pond, which I haven’t read in decades, for in some ways, the coast of New Jersey resembles the coast of Connecticut. It’s one of the first historical novels I remember reading– it is probably one reason I have ended up doing the work I do, and spending as much time as I did in New England. (You can read it here.) It’s not brilliant literature, and it was nearly two decades old when I read it, but it was certainly memorable. 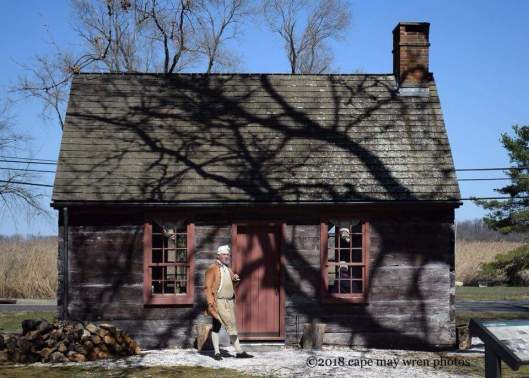 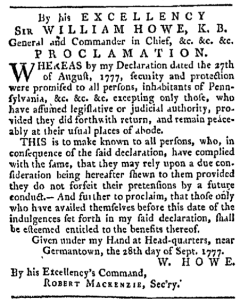 240 years ago, Philadelphia was occupied by British forces under the command of General Howe; the city was taken after a brutal campaign through the outskirts of the city, as you may recall from a few weeks ago— and this is after the Battle of Princeton, with the accompanying ravages upon the populace. This past weekend, interpreters at the Museum of the American Revolution brought the issues of occupation to life for visitors. But what struck me the most when we got home, was my cousin’s comment on this photo:

Hanging with the British and Citizens of Philadelphia

“I suppose you hang out with Confederates, too.” 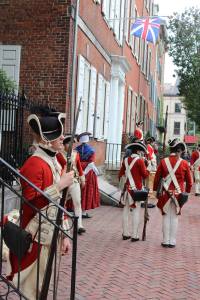 I understand that, in certain circles, British troops in North America during the American Revolution are equated with Nazis, and I understand that it’s easy to see the world in Manichaen terms (though my cousin usually does not), with good guys and bad guys. But after watching Ken Burns’ and Lynn Novick’s Vietnam War series, I am reminded how (grossly speaking) “one man’s terrorist is another man’s freedom fighter,” and while, as an America citizen, the “good” or “righteous” side should default to the Patriot/Whig cause, interpreting the other side offers room for people to question how they would have behaved in the past, and more importantly, to understand the actions of their country in the present. 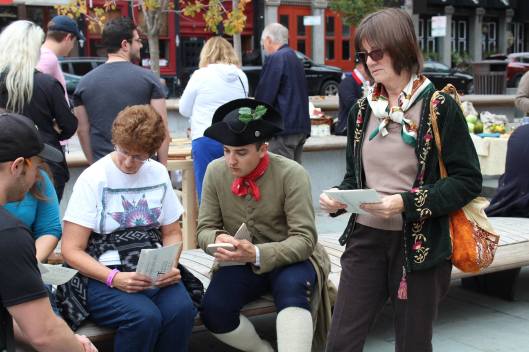 There is no right answer.

Studying the past allows us to see the present through new eyes: Philadelphia in 1777 is occupied by a colonial power attempting (in part) to retain control of natural resources. Which side will you be on when the moment comes? Will you side with law and order, or will you side with natural freedoms and the rights of man (some exclusion apply; not all rights are right for you, and do not apply to African Americans, women, or American Indians, or non-property owning white men, etc. etc).

240 years later, what is the point of this hobby, these funny clothes, wandering around outside, talking to strangers? The point is that the past is always present. If we can understand the choices people faced in the past, we can understand our own predicaments better, and one hopes, analyze our options to choose better this time. We operate from a place of self-interest, even when we wish we could be idealistic, honorable. From the outside, actions aren’t always what they seem. 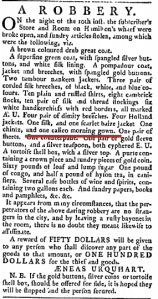 On Sunday (though I have found no photos thus far), I was arrested by the 17th for peddling a calico gown stolen from a room on Hamilton’s wharf, and alleged to be part of the Captain’s baggage. I tried to run, but was caught by two soldiers, and dragged away. From the outside, this looked like something bad: soldiers roughing up a woman. But I wasn’t innocent, and that’s the point: what looks like a bad thing may be a good thing. Costumed interpretation liberates us from the exhibit label, and allows us demonstrate a complicated past more quickly than a text panel can be read, and more engagingly.

When we assume that all Americans are “good,” we gloss over realities of people trying to get by when work, food, and money were scarce, and how “good” people do bad things. To play that well, you need both sides of the story. And that, dear cousin, is why I hang out with the Brits. 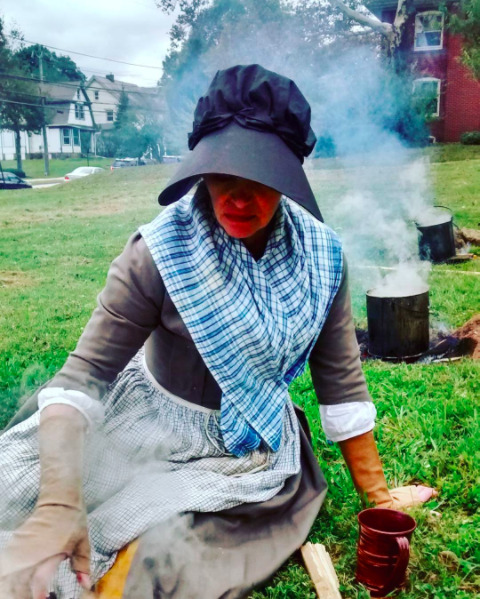 At the Speaker’s House. Photo by Drunk Tailor.

When I was in middle school, we were given an assignment that is now considered inappropriate: we were asked to trace our family history or genealogy as a way to help understand historical time, stories of immigration, and the ways in which we are all American (according to the then-prevalent “melting pot” model of being American). Exercises like that are now discouraged as educators recognize the myriad ways in which people form families, though in my middle school, what was revealed was not adoptions or absent parents but the yawning chasm of class and privilege. My people are more peasant than princess, so the women I portray in living history make sense to me. They don’t wear silk. They make things, and they sell things. 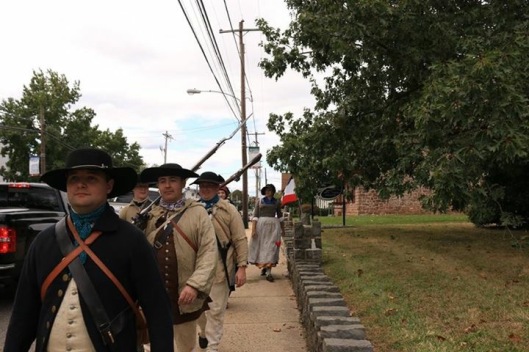 Portraying a refugee was a little trickier to wrap my head around. Whiny I can do– if I wasn’t teaching workshops in New Jersey this November, I’d be in 1587 North Carolina pining for England and wondering why I didn’t listen to my mother instead of marrying that head-in-the-sky Virginia colonist. What made being a refugee tricky for me was finding something to do. Obviously I shared in the cooking chores and the walk to Augustus Lutheran Church, but projecting “refugee” was tricky for me.

Looking back, I can see that straggling after a militia company may well have been enough– not wanting to leave their “protection,” not having a place to be, illustrates displacement. Even dressed as a middle-class or lower-middle-class woman, I am out of place sitting on grass or following armed men.

Displacement: I had not previously considered this as a means of provoking informed interpretation. Interpreting lack or absence can be as effective as interpreting presence. “No shoes” or “no musket:” these are easier, more obvious, but as a refugee, I had no home, no place, and no belonging. That seems even more important to understand and interpret today, at least for those of us concerned with making the past present, and the ways we can study the past to understand the present.