240 years ago, Philadelphia was occupied by British forces under the command of General Howe; the city was taken after a brutal campaign through the outskirts of the city, as you may recall from a few weeks ago— and this is after the Battle of Princeton, with the accompanying ravages upon the populace. This past weekend, interpreters at the Museum of the American Revolution brought the issues of occupation to life for visitors. But what struck me the most when we got home, was my cousin’s comment on this photo: 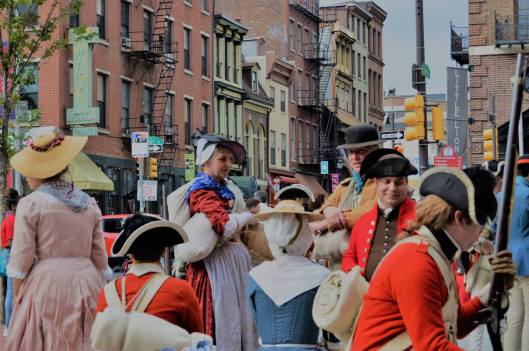 Hanging with the British and Citizens of Philadelphia

“I suppose you hang out with Confederates, too.”

I understand that, in certain circles, British troops in North America during the American Revolution are equated with Nazis, and I understand that it’s easy to see the world in Manichaen terms (though my cousin usually does not), with good guys and bad guys. But after watching Ken Burns’ and Lynn Novick’s Vietnam War series, I am reminded how (grossly speaking) “one man’s terrorist is another man’s freedom fighter,” and while, as an America citizen, the “good” or “righteous” side should default to the Patriot/Whig cause, interpreting the other side offers room for people to question how they would have behaved in the past, and more importantly, to understand the actions of their country in the present.

There is no right answer.

Studying the past allows us to see the present through new eyes: Philadelphia in 1777 is occupied by a colonial power attempting (in part) to retain control of natural resources. Which side will you be on when the moment comes? Will you side with law and order, or will you side with natural freedoms and the rights of man (some exclusion apply; not all rights are right for you, and do not apply to African Americans, women, or American Indians, or non-property owning white men, etc. etc).

240 years later, what is the point of this hobby, these funny clothes, wandering around outside, talking to strangers? The point is that the past is always present. If we can understand the choices people faced in the past, we can understand our own predicaments better, and one hopes, analyze our options to choose better this time. We operate from a place of self-interest, even when we wish we could be idealistic, honorable. From the outside, actions aren’t always what they seem.

On Sunday (though I have found no photos thus far), I was arrested by the 17th for peddling a calico gown stolen from a room on Hamilton’s wharf, and alleged to be part of the Captain’s baggage. I tried to run, but was caught by two soldiers, and dragged away. From the outside, this looked like something bad: soldiers roughing up a woman. But I wasn’t innocent, and that’s the point: what looks like a bad thing may be a good thing. Costumed interpretation liberates us from the exhibit label, and allows us demonstrate a complicated past more quickly than a text panel can be read, and more engagingly.

When we assume that all Americans are “good,” we gloss over realities of people trying to get by when work, food, and money were scarce, and how “good” people do bad things. To play that well, you need both sides of the story. And that, dear cousin, is why I hang out with the Brits.

4 thoughts on “Occupation as Liberation”