Part One of a Series

Occupied Philadelphia at the MoAR is one of my favorite events. It’s not too far, in an urban setting, and makes visible the history of the Revolution that’s hard to get at, the history of everyday people. Last year, I portrayed a follower of the 17th Regiment of Foot and a petty thief; this year, I wanted to do portray a woman in business. I’d settled on a milliner because that’s a trade I know well enough to portray–though I could not find documentary evidence of women in the millinery trade during the early months of the Occupation, nor could I satisfactorily justify selling hats, bonnets, and jewelry to a population facing inflation and food shortages. Happily, just two weeks before we’d have to pack the car, the program manager posted exactly what I needed, but had missed by not looking late enough into October: an ad placed by a woman in business.

This is what I’m always looking for: someone to be, a solid place to start the research that takes me from the general to the specific. Who was Elizabeth Weed? She was only a little tricky to find. Records documenting Elizabeth Delaplaine Dickinson Weed Nevell are scarce. Based on the date of her first marriage, to William Dickinson, in 1755, she was probably born between 1730 and 1735, making her about 44 to 47 in 1777. She was widowed by 1768, the year she married George Weed, who had lately been the superintendent of the Pennsylvania Hospital until 1767, and was then a practicing pharmacist. Weed, born in 1714, had studied and practiced medicine in Connecticut and “West New Jersey” before moving to Philadelphia around 1760. After his death on February 1, 1777, Elizabeth Weed prepared and sold the medicines George Weed taught her to prepare, and, presumably, to dispense. 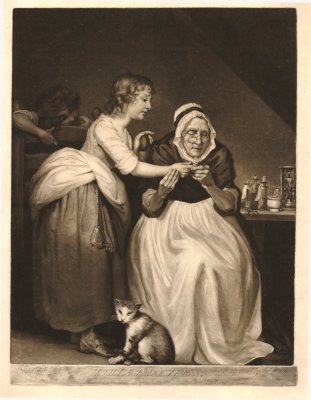 Portraying a widow six months after the death of her husband seemed plausible: I have a grey wool tabby gown (with a Fort Ticonderoga white wash stain) that seemed reasonable enough for “second mourning”– until I discovered that Elizabeth Weed had purchased a house for £600 just before she married her third husband, Thomas Nevell. A widow of means was going to require a new gown and accessories in addition to the materials of her trade– two research rabbit holes at once (plus Thomas Nevell, since he provided Drunk Tailor with an ideal role for the weekend).

Period prints provided some guidance, and since widows took up the trade of ‘doctress’ often enough, some provided a glimpse not only of clothing, but also of the material culture of 18th century pharmaceutical practice. Fortunately, I had a gown-length remnant of black and white silk in the strategic fabric reserve, as well as a remnant of black silk for a mantelet.

When she married George Weed, Elizabeth had already lost one husband, so an English gown with robings seemed a reasonable choice. Mrs. Thomas Mifflin’s grey silk gown lurked in my memory as inspiration (or justification) for the style of gown, though not for the meaning.

In many ways, the material trappings of widowhood were the easiest part of this project. I’d done some research on late colonial and early Federal mourning customs in a previous life, and had a sense of what was expected of bereaved widows in the 18th century. Clothing and accessories would signal status, and guide the behaviour of others towards me (in this case, keeping Thomas Nevell at a respectable distance). I could have chosen a gown already in my wardrobe (grey wool, green wool, blue wool) but inhabiting the world of the widow from the skin was important to me as a means of fleshing out a real person for whom I had scant information.

6 thoughts on ““Been employed these several years past””