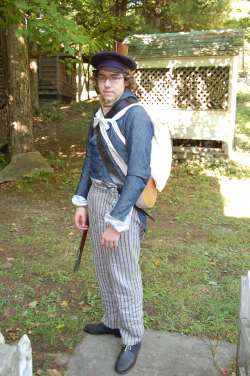 The Young Mr on site.

Mr Hiwell, the Young Mr and I ventured out to Nassau, New York this weekend to be part of Founders Day Celebration at Eastfield Village. The gents were part of the 1833 militia muster, while I traveled out intending to interpret tailoring with Mr JS, and to provide meals for the militia.

It’s an interesting assemblage of buildings, and we were pretty curious about what the site and the experience would be like. While OSV and Genesee are also assembled villages, they’re museums, with different missions and guidelines; they’re also larger, with electricity and flush toilets for visitors and volunteers alike. That means they’re lovely, but not nearly as immersive as the pitch-dark privy experience. 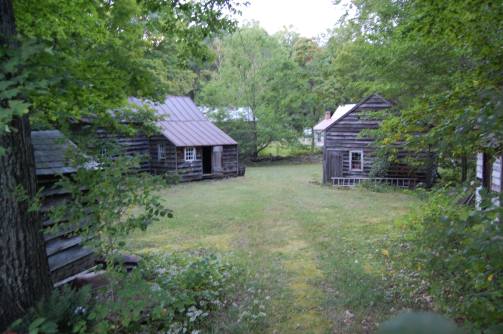 The back of the Benjamin Culver house, or, our dining room for dinner.

Wear all the patterns possible, please.

There was a lot to consider at Eastfield, but I’m tired from driving back and will stick to the simple things for now.

I was incredibly fortunate to have a bed—indeed, the entire 1787 Benjamin Culver house—to myself for sleeping. Friday night, after changing into period clothes, we went up to the Yellow Tavern to eat our supper (pasties brought from home, with hard cider for Mr JS and myself). The candle lit taproom was cozy, and I understand from Mr JS that the sleeping quarters upstairs were even cozier.

We cooked our meals in the Yellow Tavern kitchen, and ate sometimes in the taproom, and sometimes standing in the kitchen, except for dinner, which was served picnic style on the grass behind the Culver House. (Saturday supper was provided by Eastfield Village and prepared by Neil DiMarino with able help; that deserves a post all its own.) 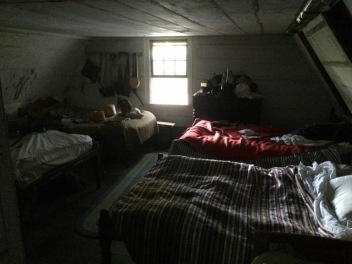 Cozy is as cozy does.

Much of time was spent on women’s work, interpreting daily tasks to a stream of visitors travelling through the house from front door to back, and sometimes upstream. The scullery—for want of a better word—had a soapstone sink which drained through the wall, which made dish washing pretty plush, and provided entertainment for all who cared to witness it. No chickens were present, but from washing dishes at Coggeshall Farm, chickens would have enjoyed the ground beneath that window drain.

The view from the scullery: not bad, really.

There are always curious questions, from “Is this a house?” in a tone of wonderment, to “Where did you get the water?”

Gentle reader: these stumped me, briefly, until I was able to gather my wits enough to reply, “Yes, it’s a house, built in 1787,” and to assure the visitor that people had, in fact, managed to live in it. The water question was somewhat more perplexing.

I started with, “Well, I got this from the hose, but they would have had a well,” when the visitor stopped me. “No, I mean, how did you get it hot?”

The kettle had been over the fire in what would be the kitchen room where Mr JS and I were set up to sew, and the fire was still producing heat, albeit from coals. Then I realized she had not been among the clump of people watching me remove the kettle from the crane so that I could pour hot water into my basins. I pointed to the kettle, and said, “Over the fire.”

It’s hard: there’s so much we take from granted in our own daily 21st-century lives, let alone what we become accustomed to when we inhabit the past. Interpreting between the two worlds, things can be lost in translation.

I’m always curious about what I’ll learn when I travel to a different century, and I think what I learned, again, was that I find it hard to find a way to interpret women’s lives and work in the past that does not reinforce stereotypes of “life was hard” and “roles were constrained.” Enough! I tried explaining the greater freedom some women enjoyed in the early Federal era, in contrast to the pre-Revolution and post- Great Awakening eras, but that wasn’t entirely successful, and would you believe that story from a woman washing dishes?

What I may really have learned is that I’ve done enough time in the kitchen and the scullery; I’d rather be the tavern keeper than the cook or scullery maid. Women were in business, and while never on the scale of partnerships like Brown & Francis, women as merchants, tavern keepers, landlords, and, yes, tailoresses, are underrepresented. It’s easier to talk down the scale than it is to talk up the scale from the washbasin to the shop or tavern, so it’s time to leave the wash basins aside for a bit. 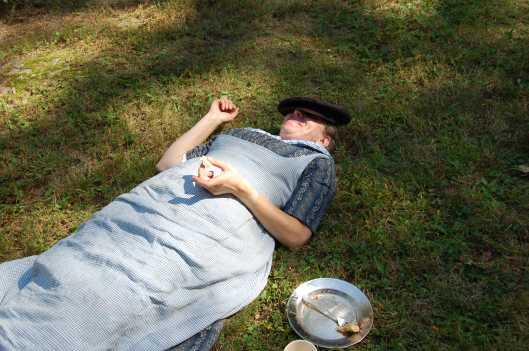 Done with dishes for now, thank you.