Mansplaining. It’s a thing. I’ve written about it before. (Dude, I’m pretty sure I know you are.) Better writers than I have tackled the topic in auspicious titles like The Atlantic.

When I write about specific experiences at Fort Ti, or Eastfield, or about “The Hobby” generally, that writing does not mean that I didn’t enjoy myself at events or sites*, or think they’re not doing a good job. It doesn’t mean I’m going to quit the hobby, or that I hate men. It means I’ve taken issue with specific patterns of behaviour that affect not just me but others in the hobby- and sometimes issues that don’t affect me directly, but are serious and need to be addressed. 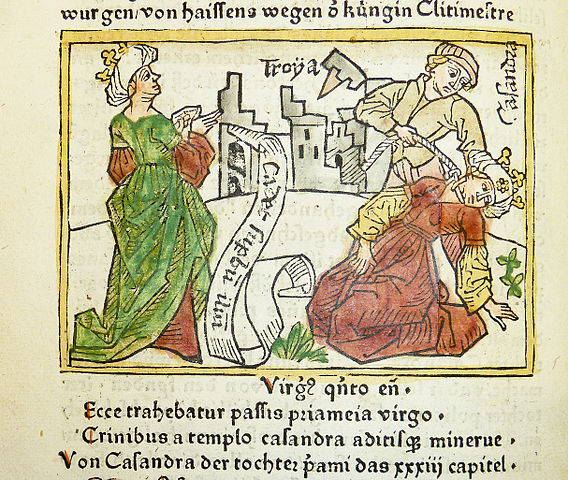 Woodcut illustration of Cassandra’s prophecy of the fall of Troy (at left) and her death (at right). Giovanni Boccaccio’s De mulieribus claris. Penn Libraries. Inc B-720

To address the comments here, I have to say that I understand Sharon’s point, and I fully expect officers to treat me as if I am invisible during military reenactments. I’m calling out after-hours socializing behaviour. Still doesn’t mean I didn’t have a good time, doesn’t mean that I don’t enjoy all the conversations I have, but I note the fiercely gender-binary nature of discussions and call them out. I’ll call out the talking over and interrupting, too. I get that at home from a 17-year-old. I get that at work from men I supervise– with the exception of those who served in the military, thank you very much.

I don’t find civilian reenacting a completely mansplaining-free zone, either. It’s better, sure, but this is a societal issue, not a camp- or hobby-specific issue.

And, to Drunktailor, yes, you’re about half-right. The older organizations, the Big Three, the classic units, have more deeply ingrained habits. But when I see younger men and newer organizations perpetuating behaviour patterns I’ve seen from the guys they say they don’t want to be like, I think it’s worth calling out. There is a generational shift, on that you and I agree. But one can become the thing one hates most, or at least adopt some of their patterns, if you don’t examine, and then break, the mold completely.

Further, I believe the young women in living history today will not tolerate nearly as much as I did, and do, in their personal or work lives. They’ve grown up fully in the time of Title IX.

Organizational change is hard. Societal change is hard. It starts with individuals. Listen. Women being talked over have talent, knowledge, and skills that can help move living history forward both professionally and avocationally. They have research, sewing, organizational and management skills that can vastly improve visitor and reenactor experiences.

Fail to listen at your peril. I’ve said it before: Adapt or die.

*And if you ever wonder whether or not I did enjoy an event or site, feel free to ask me about it– or anything else! kittycalash (at) gmail (dot) com. Thanks for playing!

4 thoughts on “Once More, with Feeling”