After a late afternoon meeting that left me raw from the way men speak over, interrupt, and dismiss women, I began to think again about a conversation I’d had with a friend at lunch about women’s roles at living history events, primarily military, but also militia, so let’s call them Gun Shows.

What do women do at the Gun Shows? They cook, for one thing, tied to camp fires. That’s at least a little better than the spinning that can happen, but it’s still not always right. I think a lot about how we’re not truly representing the ways that armies moved, slept, provisioned themselves, and how that affects the roles that women, children, and the (forgive me ) Invalid Corps might play. Yes, there are options: laundry, petty sutlering. There are women doing those things and doing them well, which is fantastic. When I think about how I might complement that, I end up thinking about women even naughtier than Bridget– and I think Bridget must have been very naughty indeed.

Even when you move away from military events, let us say to militia events, similar segregation occurs: women cook and wash dishes, men fire weapons. It just makes me tired, this notion of women forever being pendant to a gun, dependent on housework. It leaves me wondering what else I can do. 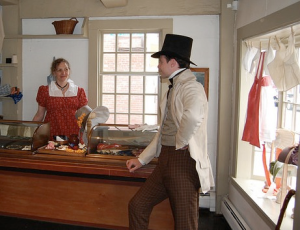 That’s easier in a civilian context. Women ran boarding houses, had small shops, ran needlework and boarding schools, worked as seamstresses, soap makers, tailoresses, milliners, mantua makers, painters and silhouette cutters. None of those things belong in a camp, and I begin to think that unless I can figure out a feminist interpretation of women’s lives of drudgery, I will have to give up the Gun Shows completely. And yes, for those of you who know me, that will be a natural transition, won’t it?