Or, Fleshing Sexism into History 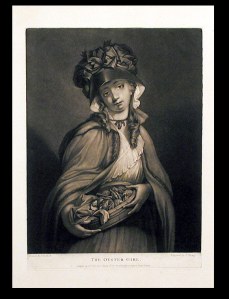 Here’s a bitter blog post instead of the angry one someone expected after the Turkey Shoot. It started elsewhere with a discussion of this print: there’s more going on in this, and in many genre images of oyster girls and oyster sellers, than you notice at first glance. (First glance is that fab-u-lous bonnet.) There are clues, though, that she is selling more than just oysters. It’s a code, remember? The gaze is one clue, though it reminds me of a cholera victim’s languor.

Yes: this image suggests she is also selling herself.

It’s something I’ve thought about doing as part of my street vendor/Bridget impression. Transgressive, dangerous: true. As a milliner, I’ve had a money bag shaken in my face, coins rattling suggestively, a sailor eager to spend his pay. Milliners and seamstresses both had reputations as women of exploitable, if not overtly easy, virtue. They’re a classic trope in 19th century literature, though I suspect the real reason for the suggestion of looseness was economic independence. But women certainly were selling themselves in the past, so why not portray that reality with carefully selected, trusted role players?

For one thing, it’s dangerous. You’d have to script it, and interact only with really trustworthy people. It’s not family friendly, though despite the strenuous efforts of some sites, actual history isn’t family friendly either. (I’m looking at you, CW .)

I ponder this role, and women’s lack of power historical, as I ponder Fort Ti and nurses’ reputations, carefully maintained in Army hospitals in later wars. (Not to fear, I will behave, honest.) And I also ponder it as I continue to struggle to understand the Gun Show, the misogyny in the hobby, and the general misogyny of American culture. Like many others, I’ve read this blog post,, and some of the more annoying comments. Yes, I, too, de-escalate now and have in the past. Some of the changes I’ve made in my life revolve back to this concept, and have to do with authenticity and stepping back from de-escalation, subsumation, and self-repression. So why would I not continue that process into my historical work and play? 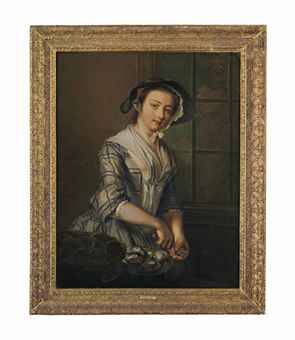 As I wonder how to spin a feminist interpretation of women’s marginal roles and drudgery in the past, it occurs to me that forcing the women’s economic disparity and lack of agency to the foreground might provide an answer. Selling myself along with oysters, apples, or cherries might finally make the points I want to not just about women’s lives historically, but about women’s roles today.

(I’ve already made the jokes about hands-on demonstrations, so y’all can keep ‘em yourselves, okay?)

2 thoughts on “A Side of Oysters”