It was a simple set up: two barrels, a board, my frail, and me. (I could really use a wheelbarrow, and a rain deck. At least the rain deck is something I can make myself.) But this was more than adequate to sell luxury goods (rum, whiskey, radishes, and ginger candy) to the soldiers at Fort Dobbs.

I didn’t think it was hot– which may be thanks to that nifty new checked linen shade bonnet– but it was. Have I forgotten how to take care of myself outdoors in warm weather? Perhaps because I’ve spent so much more time lately on winter events, I’ve let the “drink all the water” mantra slide. It’s clearly time to revive the summer skills, with Monmouth not all that far away.

I could be making bonnets. I could be applying for moar jobz. I could be finishing the soup that’s on the stove. But instead, I’m annoyed by a museum’s social media posting. For the sake of all that’s holy in history, is there nothing more to an 18th century soldier’s life than his weapon? Now, to the museum’s credit, only 50% of the posted images could truly be said to focus on the musket or some musket-related tool.

But what’s so damned annoying is that the organization in question, all brand-spanking new and on everybody’s “must-see” list, falls back on the same old tropes on social media, which makes me want to know more about their educational mission. If the social media message continues to reinforce the same messages (guns are important) instead of expanding to include a soldier’s daily life, or even his inner life, the public has trouble moving past that simple message to ask more questions.

Museums and their representatives cue the questions visitors ask by framing objects, writing labels, even aiming the lights, to focus on what the museum believes is important. Put guns front and center, that’s what the questions will be about instead of about hygiene, clothing, literacy, or diet.

This image got me really excited, until I read the caption.

“Brick dust for polishing the brass elements on his weapon.” Dammit! It’s not tooth powder!

I understand full well that the museum’s interpretation of our national founding is far more inclusive than many museum visitors have previously encountered. I understand that the educational program currently lacks a permanent director, and is not yet fully fleshed out.

Museums are among the most trusted sources for information. Presentation matters. What museums emphasize matters. If museums — in their exhibits, programs, or marketing– continue to “give the people what they want,” the people will not know that they can want something different, or even that there is something different to want. Inclusivity is constant: in the galleries, in the labels, in the programming, in the staff, and in the marketing (which this museum did, in fact, do, masterfully, at a major train station).

But I’m picking on them for this post because they are the top of the game right now, and if they can do better in the galleries and in the train station, they can do better on social media. They’ve had some of the best female interpreters around working this month and the end of last, and yet the first social media post on that program is of a soldier, and focuses on his weapon. The past– and the present– deserve better.

With 400 miles between us, Drunk Tailor and I have few chances to explore the past together, so I was both delighted and nervous when he agreed to join the British Garrison 1775 event at Fort Ticonderoga as one of Captain Delaplace’s servants.  Even better, we were also joined by the itinerant Deep North Yankee who wandered around the Fort (possibly seeking roofing shingles, of which he is much in need). 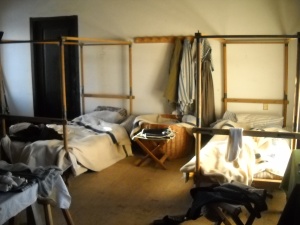 Friday nights are always magical, candle and firelight (and only the warmth of the fire) as we drink cider and talk about history. But morning always comes: Saturday, cold and clear, Mr S and I woke and blinked across the room at each other, and I wondered to what degree I really wanted to ever crawl out of bed…only hunger and an eventual need to pee (and fear of a Sergeant) propelled me.

First order of business: breakfast. Mr S, supplied with his corn meal of choice, made us johnnycakes, which provided perhaps more interpretive than nutritive value. Still, they were warm and tasty and he is the only person I know who can make them; my efforts end up as FEMA disaster sites.

Captain Delaplace’s servants were tasked with cooking for his mess, so Mr S and I got a start. We had a chicken, an onion (I traded onion # 2 for some bacon), butter, carrots, potatoes, a butternut squash, salt, and some port. I don’t know where this English serving woman of 1775 encountered mis en place, but she accidentally introduced coq au vin to the Captain’s table with the dinner meal.

The Captain and his Lady dined on chicken braised in butter and bacon with root vegetables in a port sauce; we servants waited until they were done before we could eat. (Confession: I need to eat a lot, and have a sensory overload problem, so when visitors fully crowded the room, I had to dash across the parade ground for a Clif Bar and an Ativan before I could continue to wait for my dinner.) In the afternoon, dishes were washed at the table, as was common (at least in early New England), dried, and set away, while the Captain’s lady and child played in the cabbage patch between the beds.

When the room was empty, servants were able to eat (huzzay!) and found the meal very tasty indeed. I would certainly make this again, and learned more about cooking– a typically female task I generally try to avoid– than I had expected to. Then we had yet another round of dishes before it was time to tidy the room and make ready for tea or supper.

To that end, we cleared the table and broke it apart to reveal the floor and hearth, which needed to be swept of bread crumbs, squash peels, dead leaves, and other detritus. The best way to sweep an unfinished floor in the 18th century (per Hannah Glasse et al) is to strew the floor with wet sand and then sweep. I mixed sand with lavender-infused vinegar and threw it on the floor; this keeps the dust down as you sweep months of dust and dirt out of the corners and from behind tables and chests. 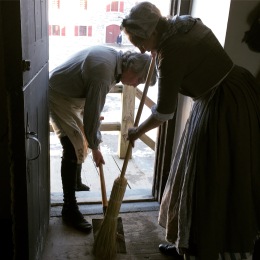 The trick is to sweep in one direction (more or less) from the back of the room to the front, and then to gather up the sand (here in a shovel) and pitch it off the landing. Much was thrown out the door and over the stair rail, just as servants would have done in 1775. (And I am told it is soothing to nearly hit the sergeant, but perhaps that’s merely hearsay, if not heresy.)

When we were done, we restored the table (Drunk Tailor noticed the height of the ceiling, and wondered about hanging birds in cages whist awaiting the return of the tabletop), fully reset with cloth, candlesticks, plates, and knives, ready for the supper we didn’t cook, as we skipped away at the close of the day to find our own meal in Glens Falls, where live music is inescapable on a Saturday night.

It’s upon us, this Princeton event, and Peale’s, too. And the overnight march I missed two years ago. I’m so glad to be part of this, and I’m interested in seeing where it goes from here– partly for me, and partly for the way we do living history. Now, I’ll miss some of what I’d like to see (like Mr. White’s tour of the second battle of Trenton, but when you’re plundering in Princeton, you’re committed.) A formal media release may be downloaded here.

A little more than two years ago I was asked if I wanted to join the Peale’s March to Princeton. I said no, because women couldn’t march and that was the experience I wanted. Someday, I will have the hallucination that allows me to square experiential learning with authenticity, and, at the same time, the world will care about having a women’s Tour de France.

Anyway: there’s a point. This event became a pivot point for me in thinking about accuracy and authenticity of all kinds.

Accurate impressions rendered in a place of shared value will transport you to the past, and give you insights you did not expect. That is the point of these exercises: insight and understanding. It’s how to get high on history.

In Palmer Square and at Morven, that means stealing (from each other), soldiers arresting Quakers, Loyalists and Whigs insulting each other, arguments about loyalty oaths, and women being attacked. (When you see the grey gown grabbed off the square by the red coat, please know that this is acting.) It means rough justice in a drum head court martial.

Will it work? I think so. Will it change my life, the way not attending two years ago did? That will depend on what I regret.

“It looks like you rolled in dirt,” I said to the Young Giant when he dumped a gritty mess on my lap.
“I did,” he said, “but it was rolling with a purpose. We dug a fire pit, and then I had to keep the fire going. So I was on my belly in the dirt.” 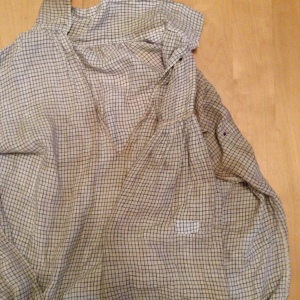 This was followed by, “Mom, you need to mend my shirt.” But first, I needed to wash that shirt.

I’d like to wash that shirt right out of my hair, but there it is: it’s got to be attended to.

I did what mending I could before I washed it, since some areas seemed more likely to disintegrate further in the wash. 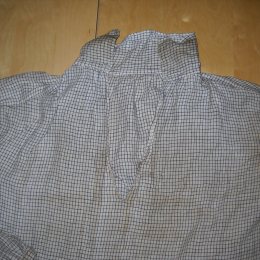 That’s clean linen verus dirty linen, the 18th century wrestling match. Patch secured, I very nearly packed this into a priority mailing container for delivery to the esteeméd Red Shoes Laundry, but I took a deep breath, and put the lobster pot back in the cupboard. (Yes, I considered boiling this on my stove top on a 95° day. Wouldn’t you?)

Instead, I trekked down to the cool of the basement and ran the water as hot as it gets and added Oxiclean (used by some of the finest weavers I know when they encounter dyes less fast than anticipated.)

The first tub achieved a kind of colloidal slurry of mud and sweat and soap. Delicious. Five rinses and an overnight soak later, dirty shirt became just a shirt again.

I took advantage of the clear weather to dry this outside on the grass, hoping the later sunlight would aid in whitening.

Wondering about that patch? Wonder no more, compare: 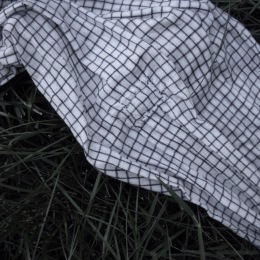 It’s another one of those “is it done? it’s perfect” situations. I’d love to wash my clothes with historically correct methods, but for now, the shirt’s clean enough for final mends and wearing in October. The winter should give me time to figure out stove top washing.