Whilst serving as the commandant for a research-paper writing prison*, I spent some time perusing the Met’s digital collections, in particular the Costume Institute’s collection of Men’s Fashion Plates, because, you know, stuff.

I stopped at Plate 002, because I knew I’d seen that coat somewhere before. Why, yes: at the MFA in the Art of the Americas Wing, where I recently spent a pleasant afternoon with the Drunk Tailor. After some initial joy at discovering dust on a teapot, we got down to the business of setting off proximity alarms, reading labels, and contemplating  the occasional neck stock.

Mr Myers stopped me, though: what a handsome coat. High shoulder seams, long cuffs, buttoned all the way up. Nifty high-waisted grey trousers, too, and what seems to be a yellow waist coat. The portrait is dated 1814, and the fashion plate 1807.

Portrait of a Gentleman of the Society of the Cincinnati. Miniature by James Peale, American, 1802. Philadelphia Museum of Art, 2000-137-11

And our friend Sully paints one in 1814.

Brown coats are clearly classic: Sully’s got one himself in 1821. I’m sure there’s a dissertation out there somewhere on the influence of fashion plates on American men’s  fashion and representation in portraiture–  I can almost remember stumbling across the reference. So that echoes and re-echoes and reflects through time even as I recall not just the the folk wisdom about brown suits, but the significance of well-tailored suit. Maybe from 1802-1821, brown is the new black.

*Ah, teenagers. The Young Mr failed to complete a paper by the due date, so I spent some quality time ensuring he got back on track.

Tailoring: It’s the thing, right? A well-cut, well-fitted, and well-crafted garment fits like no other. Why do you think I prefer my historical clothes? They’re fitted to me, so they feel right.

There are lots of resources, if you’re willing to dig a bit. Last year, thanks to Mr Cooke, I brought you The Taylors’ Instructor. Good stuff, right?

But wait: there’s more. So much more. Not just the V&A Tailoring Reading List. Actual media. You can watch tailors using thimbles properly, and pad stitching with grace and ease. Prepare yourself for the bona fide English accent as Rory (winner of the 2009 Golden Shears Award) Duffy teaches you a thing or two in these videos. 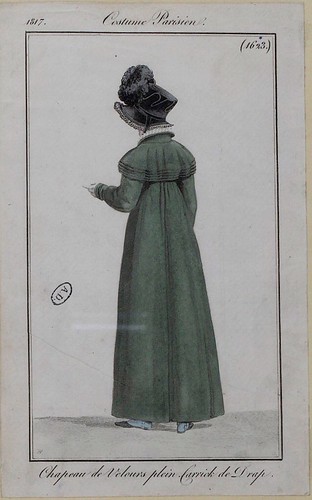 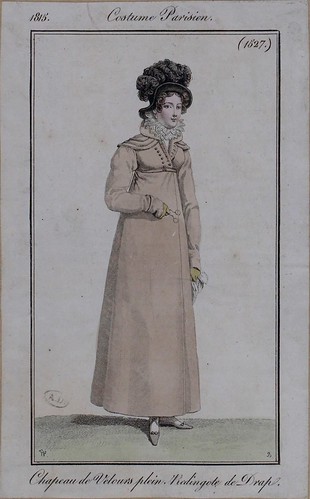