A greatcoat or driving coat from 1812

It is lashing rain on the windows chez Calash, and soon enough the present-day chariot known as the Subaru will commence hauling Mr S to the train station and the Young Mr to school. Bikes and buses are unpleasant in the rain, though the Young Mr is always (and only) driven to school on Wednesdays due to a peculiar busing and schedule arrangement.

But what if they lacked this luxury, and had to venture out? The way it sounds out there, the smartest choice would be to stay at home by the fire, but someone  has to fetch the wood and the water, and someone has to milk the cow and fetch the fool cat in.

If you could afford one, you’d wear your greatcoat (new or second-hand).

Made of broadcloth, this would be your non-flammable water-resistant choice for inclement weather. Woven and then milled, the fabric would be dense enough to resist water and hold a cut edge, which makes those capes a more winning proposition.

Over a slim-cut body, layered capes can emphasize and exaggerate shoulder width, making these utilitarian garments sexier than you’d expect. (Of course, I have a thing for guys dressed like this, so your mileage may vary. But by the Civil War, the lines are boxy and, well, yawn.)

Greatcoats aren’t even remotely on my list for this year, but someday I’d like to make one, if only to borrow it. Baby, it’s cold outside. 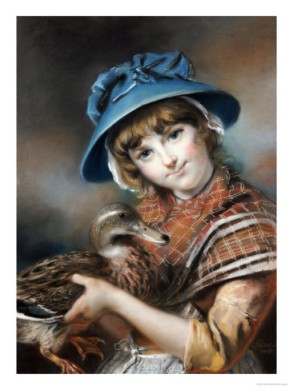 A Market Girl with a Mallard Duck, pastel by John Russell, 1787. (Sold by Christie’s)

I like Fort Lee: after all, I like big guns, and Fort Lee has a 32 pound gun.

It’s always cold, though, and I could use a day sewing various projects or vacuuming. But it’s also the last event of the season. Of course, in the slack time, I always stand on the NJ shore wondering how feasible it would be to run over to Manhattan for trim, fabric, or a trip to a museum. In kit. Because…. why not?

But Mr S wants me to come, so I’ve stirred myself to cutting and pressing and starting to hem a wool kerchief. This is made from some crossed-barred wool found in Somerville on the shopping expedition with Sew 18th Century.

She kindly sent me the image above, which is a good thing because I get distracted and think, “you know, that image with the duck and the girl and the bonnet,” which will give you 71,000,000 results in Google, but fortunately includes this one.

Three hems: I should be done by now.

It’s an easy project, but sometimes those are the hardest because you’re not learning anything. That, of course, is what Netflix is for: ghastly murders or sophisticated dramas keep you going on repetitive hems.  (I do my best backstitching to BBC crime dramas– go figure.)

So, a November Saturday up on the Palisades means wool, in fact, requires wool, and for the first time I think I have enough wool to stay reasonably comfortable. That’s a cloak, kerchief, gown and two wool petticoats, plus wool stockings and, if they fit, sheepskin insoles for my shoes. We have a wool shift at work, but at about 50 years later than the Fall of Fort Lee, it provides no justification for a wool flannel shift. Still, a wool shift is a tempting thought, and suddenly that kerchief hem gets more interesting, as I start to think about where to look for documentation of wool or flannel shifts.

Summer is, of course, fully upon us and those of us on the eastern seaboard feel its oppressive and sticky heat. Ordinarily, my town isn’t terribly hot and cools off at night, but like everywhere else, this is not the case. Last weekend, I wore wool; technically a wool and cotton blend, but more problematically, burgundy in color. This is the price of gowns inspired by London watercolors.

This leads to constant questions: Aren’t you hot in those clothes? Aren’t you dying of the heat?

There is an underlying tone that suggests that perhaps the people of the 18th century didn’t know enough not to wear wool, or perhaps they only had winter clothes. I’ve heard “well, they didn’t know any better,” as if they never took their clothes off, and if only they had, 18th century men and women would have promptly abandoned their stays, gowns, waistcoats and breeches for tank tops, shorts, and wife beaters. Of course, history is not a Fiat commercial. 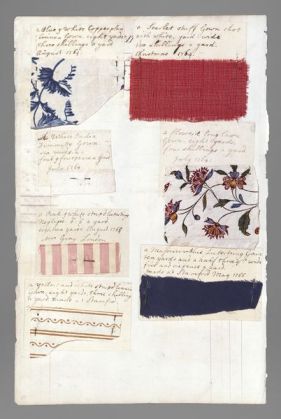 They took their trade to James Green and merchants like him who offered “Piece Goods of every kind … suitable for all Seasons, but more particularly for the approaching Summer.” (Boston Post Boy, August 8, 1763.)

And what would be suitable? Cottons, fine linens, light silks, in light colors.

Barbara Johnson chose floral prints on white backgrounds in July and August of 1764, both could be “suitable for summer.”

And as you probably know, the answer to “Aren’t you hot?” depends on who you are, but is often, “Not really. Once my shift/shirt is soaked with sweat, I’m pretty comfortable.” This is true as long as your shift/shirt is made of linen; cotton and cotton/linen blends don’t wick as well as linen.

A compatriot asked how we handle food and cooking in the field. What do we do about “yucky stuff?” by which she meant meat.

She was doing just about the same stuff we were doing, and with Battle Road around the corner, I thought I’d write about food in the field, and ways we handle it. Other people will have other ideas, but the main things I think about are:

Food safety is one of those things where you really don’t want to compromise too much, though from eating at the farm, I think there is more leeway than we admit. I will confess that when I was poor and in school, I stored dairy products on the windowsill of my studio when there was no fridge, so eating at the farm is like eating… when I was a whole lot younger.

Here are my principles. I’m not an expert, your mileage may vary, but this is where I begin.

Start with who you are.
Objects you bring, and food you eat, should be true to your impression.
Authenticity goes beyond the date of accouterments: a porcelain tea set may be quite correct for a 1778 Newport or 1763 Boston parlor, but it makes very little sense if you are with a Continental private. One chipped plate is different for a woman to carry, or a piece of pewter. How long either would last you is another story, but at least you’d have a story. If you are the Colonel’s wife, it’s a different matter, even more so if it’s a British Colonel.

Food safety trumps purest authenticity.
Cloth covered, hidden ice packs will hurt no one and may save you misery later.

In a hot summer camp, we keep a large pitcher full of water (see the Stubbs painting at left). Covered with a white linen or cotton cloth, it will keep coolish and free of dust & insects (or dog fur & fleas, if you’re in the Stubbs painting). We sliced limes into our enormous pitcher, and refilled it all day from the pump at OSV.

Limes are in period; justifying a source can be tricky, but at a certain level, safety trumps authenticity. 98 degrees and 90% humidity means drinking a lot of water.

Chances are you’re a caffeine addict like me, so what do you do? Boil water in a kettle, and bring tea in a screw of clean white paper is one answer. What’s your justification? I’m a personal fan of ‘stole it from my master,’ but in small quantities, perhaps you got it from home, or did a farm woman  a favor. Or stole it from her. John Smith (I kid you not), Sergeant in Colonel Lippitt’s Rhode Island State Regiment, in Continental Service, writes in his diary* of apprehending geese and chickens who failed to respond with the correct password when challenged.

Done at last: the shift. Plus bonus bonnet

Remember that shift I couldn’t finish in time for HSF # 2, UFO? I did get it finished for HSF # 3, and a bonus petticoat as well. They don’t go together, but in honor of the excessive amount of snow we got this weekend, they’re both white. The snow is also how they got done: nothing like snow days and travel bans to keep one home and sewing.

How ‘Bout Them Facts?

The petticoat, over another petticoat. It’s that sheer.

Back view (again with cat bowl)

Notions: Both: Just thread. And some left over white cotton twill tape.

How historically accurate is it?

The shift is pretty close. The fabric is, well, not the linen they had, but it’s as fine as I could afford. It is entirely hand-sewn, and the sleeves have bands and tie closed.

The petticoat is also hand sewn, and uses a historic garment for a basis. (I also looked at bodiced petticoats at the Met.) However, it is made from a curtain and while I unpicked all the seams, the machine stitching holes remain. It gets the job done that I wanted it to do, though: fluffy white stuff.

Shift: Killer. Started it last August and have worked on it off and on since then. It went to so many events in the basket that it smelled like woodsmoke. Intensively completing it probably took 24 -30 hours, so it could be a 40+ hour shift. After a while I stop paying attention.

No good way to know…the fabric was bought so long ago! The petticoat curtains, when not on sale, are $20, so $10, because I only used one. For the shift, it’s harder to say. I piece aggressively when cutting out, so I bought less than the pattern recommends. Remnants were used for the petticoat bodice and various linings, including the Curtain-Along robe currently underway.