Yesterday I felt like an anthropologist on Mars, or perhaps more precisely, like Ariel and her collection of human objects, as my friend suggested.

We are inventorying a collection of militaria currently on display at a museum in the northern part of our tiny state, and while I recognize most of the things, I don’t have the intensive knowledge that some of my friends and acquaintances have to recognize the subtle changes in accouterments over time. Fortunately, plenty of things are marked: the military tends to do that. And fortunately, there are books and the Google and I remember enough of what I learned to ask the right questions.

The most meaningful items are the ones that have been personalized in some way, or that were never issued at all. There were, for a long time, two small shells picked up at Anzio and Nettuno, each white interior curve labeled in ink, one Anzio and one Nettuno. I could only guess at their significance, as you probably can too: what I did not know was that the soldier who picked them up was only 18 in January 1944—and how appropriate it is to have returned them to his daughter this month. 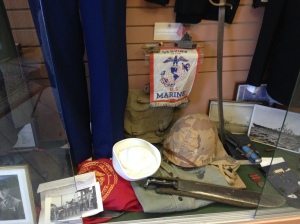 Not about Anzio, but this is a typical case.

The cases are packed with things he and his friend collected, all of which had some meaning to them: that guy, this place, that story, these memories. The soldier who picked up the shells could never tell his daughter or granddaughters any of what he had seen, though later on, he began to tell his nephews. But he assembled this collection and in that, I think, he was telling us all. Our job at the museum is to translate mute, general issue objects into meaningful individual narratives.