Remember the Amazon? She has the dressed-up dog and the Muff of Doom. I’ve gotten a little obsessed with her, and that obsession has led to some interesting places.

The Muff of Dooms Past. Poor minks.

For one thing, it’s winter, and everybody has cold hands, so everybody is making muffs.

Here at Crazy Scheme Central, I had thought about making the great Ikea sheepskin Muff of Doom, but that’s a place I generally don’t go until after the Christmas madness, when the store in Stoughton does look as if it had been plundered by orcs.

Instead, I bought a Muff of Dooms Past at an antique store. I wouldn’t buy a new real fur anything, and I do feel bad about the poor minks, but at least no new minks were harmed. Or sheep. But golly, it’s soft and delicious and it’s easy to see why people wanted fur, given that we’re essentially hairless mammals. It measures 11 inches high (not including decoration) by 11 inches wide at the narrowest point, and 14 inches wide at the base. 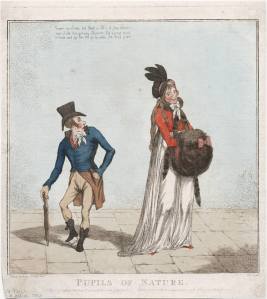 The Muff of Dooms Past is not nearly as large as the Amazon’s muff, or as large as the ones seen in fashion plates and satires.  The sad little tail-and-paw fringe has precedent (see left), though I believe at least one tail has been lost. As far as I can tell, with no label, this is probably a 1950s muff of local manufacture (there is a fur company, now in Warwick, that started in Providence, and is now going out of business). It could be earlier, but the flexibility of the pelts suggests a more recent vintage.

The Met has some fantastic late 18th/early 19th century muffs of a color that screams warmth. The size of the brighter one is just 8 by 7 inches. In case you think that’s anomalous, here’s another muff of similar type and size.

They seem small compared to the Amazon’s muff, and even the Student of Nature’s. And yet, there they are. It’s hard to know exactly where the measurements were taken, and if they include the extreme fluff of the feathers; I tend to think not, but that the measurements are for the firmest part of the muff. (That’s how we would measure, and then include the largest “fluff” measurements in a ‘special measurements’ field with a note.) There is a 1780-1820 swan’s down muff at the V&A with a record but no photo or measurements.

Satires are hard to use: we know they’re depicting some grain of truth, usually in the background details, but also in what they’re portraying. How do we interpret those enormous muffs? They appear over and over, in consecutive years of satirical engravings and fashion plates. Maybe the way to interpret them is to see those muffs as the extreme end of fashion– Alexander McQueen muffs, if you will– and the extant muffs represent the more reasonable dimensions of fashion. I wouldn’t call red feather muffs typical, and I wouldn’t suggest we all carry them. But based on what exists in museum collections, maybe a smaller-than-satire muff is within the bounds of reason for actual use.