Or is it evidence of pockets?

In any case, I thought it time to upgrade my pockets, since I have given so much attention to the rest of Bridget’s clothing. I have also been talking with a colleague about a pocket game activity, similar to the process I’ve used in thinking about Bridget: what is in your pocket? If I’m going to try that out in public, then I’d like not to be embarrassed about my pockets.

The first pocket I made was based completely on one in the RIHS Collection, and it annoyed the daylights out of me as it had exactly the same loop on top and twisted around under my petticoats, making the opening hard to find. I also realized that it was too small to be really correct for a woman’s pocket: those tend to be larger. Sew 18th Century has a really nice article on pockets here. 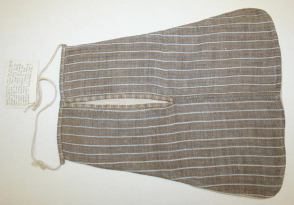 So I made a larger pocket based on this one at the Met, and made of a grey and cream striped linen with the slit bound in red calico. It’s dated to 1789, and technically that’s too late for my uses.

But the next one is too early.

Well, it has survived this long, and Wm Booth has that lovely shell print cotton, so what’s a sister to do? Pockets don’t take much fabric, so making a matched pair of printed pockets seems the thing to do.

Now the question is, what should be in those pockets?