Regency, Federal, Early Republic:  we use these terms to cover (roughly) the period from 1790-1820, though technically the Regency period would mean only 1811-1820, when George IV served as Prince Regent, ruling for his incapacitated father, George III. In the United States, “Regency Costuming” is a bit of misnomer if you’re copying early American gowns, but it does serve as a handy short-hand we all tend to understand.

Grossly, the principles of dress are rooted in neo-classicism and republicanism rising from the American and French Revolutions. Specifically, we see a turning away from the heavily-boned, panniered, and formal gown styles to the looser, short-stayed, flowing, simpler gowns.  The transition is summed up for me in this satirical print.

So, you’re no longer side-to-side wide, baby: you gotta have back.

How do you get back? There are a couple of perfectly authentic tricks that do not require you to stuff a cat into the back of your dress, though you can do that if you want. The combination I have found to work is two-part: a small, crescent-shaped pad, and the method of pleating. How you deploy the pad and the pleats will give you the silhouette you desire.

First, though: which silhouette? In really the 1790s, the silhouette is rounder than you might think. It really is a round gown.

To get that look, I use a small rump pad, bustle pad, or bum roll (call it what you like), which is stitched to the inside of my petticoat. 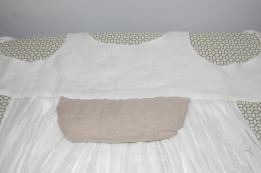 Pad from the inside 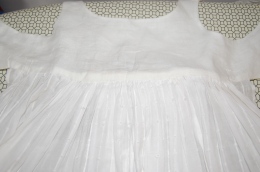 Pad from the outside

That’s the white IKEA curtain petticoat I made during the extended snow days of last year, and which I have worn with the red curtain-along open robe and under the petticoat and open robe for What Cheer Day. The pad is the same natural light-weight linen I use for a many gown linings, filled with bamboo stuffing. If I’d had wool on hand in the small hours of the morning I made this pad, I would have used it, but all I had was bamboo in the rush to finish up and have something to wear for a photo shoot.

The other key factors are pleating styles and fabric weight. Pleats can add lift, but in general, the lighter the fabric, the more lift a small pad will give you. 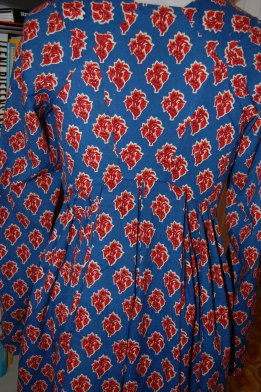 I’m particularly fond of the pleats used for the gown shown on page 75 of Nancy Bradfield’s Costume in Detail. I’ve used this as a guide several times, and I am very pleased with the results. They do vary, of course, depending on fabric weight, fibre, and length. Stiffer cottons, like the Waverly Felicity of the curtain-along gown, will make a round shape; tropical weight wool does fairly well, also, but the most amazing 1790s rendition I have achieved to date is the light-weight India print cotton short gown. 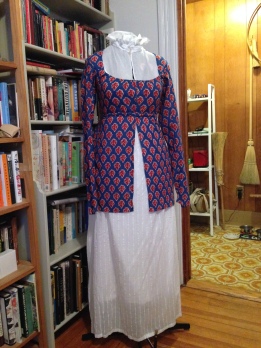 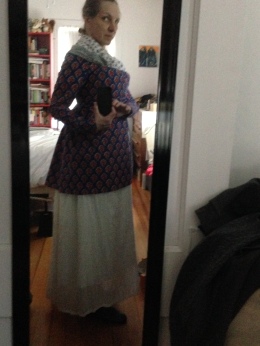 Now that’s 1790s back. The bustle-like shape surprised (OK, shocked) me, but on the whole, I think I’m pleased. So there you are: pad, petticoat and pleats: that’s how you get back.

3 thoughts on “Back Bump: The Regency Silhouette”