Not that this is an exhaustive or final chronicle, but Jackie asked about the apron. 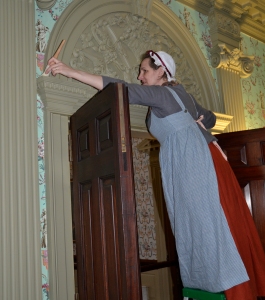 I first encountered this form of apron at Old Sturbridge Village, on display in the Firearms and Textiles exhibit space, which I think of as “Muskets and Muslins.” The accession number given on the exhibit label was 26.39.4, but the object does not appear in the OSV online collections database (they do warn that it contains just a selection of their total 60K-plus object holdings). The original at OSV, as sketched and described by me in April 2012 has a drawstring at the neck, straps that button, string at the back opening, and is slim, without gathers. That means the bodice is very similar to the gown bodices of the early part of the 19th century.

There is another original checked bodiced apron in the Pocumtuck Valley Memorial Association collection in Deerfield, MA. This original appears in color in The Needle’s Eye by Marla Miller. As you can see in the images of my apron, I mashed the two styles together to suit the amount of material I had on hand, the skills I had three years ago, and the amount of time I had between seeing the apron and the day of the program, which was probably two days during which time I had pleurisy.*

This is also wrong, but funny.

To refocus: I chose to wear this apron at Whitehorse House in 1820 for a really wrong reason: it was what I had.

Prints in the British Museum show a maid in a yellow gown with a black apron, no bib; there is another, with a maid in a green gown, in a wikigallery, that I could not fully track down; a London Market scene; and a French print from 1818 that does show a bibbed black apron on a shop assistant. The visual research I’d done for the 1820 program suggested that black aprons were the height of fashion, and that they did not always have bibs. 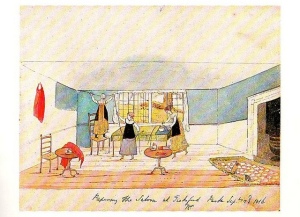 Papering the Saloon at Tickford Hall, watercolor by Diana Sperling, 1816.

Since we deal in confessions here, I will tell you that I did buy material for a black apron, and I planned to make a strapped or bibbed one, much like the one Sabine made. The appearance of the dark apron in Diana Sperliing’s watercolor of the ladies papering the saloon at Tickford Park put the dark strapped and sometimes bibbed apron the in English-speaking world. And still I did not manage to make one. If I were to do an 1820 program again, or even an 1813 or later millinery shop again, I like to think I would find the time to make a black strapped and possibly bibbed apron. I do think they were the height of fashion, and are likely to have been worn by women in shops, and by maids.

Do I think the checked apron is wrong? Given that I can rationalize anything, of course not! I think a checked apron is probably reasonably appropriate within the context of a kitchen, even in 1820, especially in New England. Since we did not cook on Saturday, the black apron would have been ideal, but I think the checked apron passes. To make it pass with a higher grade, I will freely admit it requires button and tape upgrades. Since the next dates on the horizon are 1775 and 1780, chances are good those upgrades won’t happen anytime soon. * Do not attend an all-day outdoor event in the cold when you are not well. Do not attend said event without your cloak, or in stays you have laced up a little too firmly. Do not deny that the cold you have might actually be the start of something bigger, when it includes a productive cough. Lo, the lessons of living history are many.