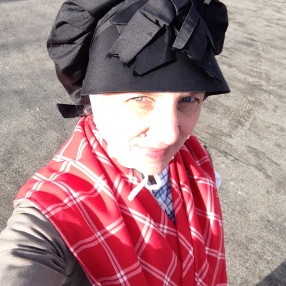 Fort-based: as military as I get.

I am not a costumer, not really. But I’m not really a re-enactor in the classical sense: I no longer roll with a military unit and my military experiences are typically fort-based domestic activities. My favorite events have me representing women’s work in the past, the quotidian experiences of ordinary people. Documentation is my thing: what happened on a particular day, in a particular place. Who was there? What were typical clothes? The foods in season? The gossip of the day? 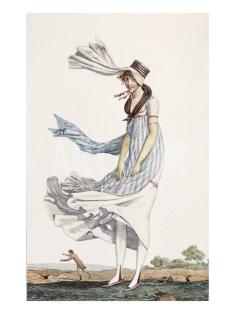 And yet. Everything I do is really a fantasy, even when it’s work. We are not [yet, always] using the actual words people spoke or wrote. We typically inhabit characters who are grounded in fact but for whom we do not have full documentation. We are representations. We are playing, more than we are being.

I could easily be persuaded to take a walk along a sea wall  or coast to collect seaweed samples for pressing. This would inch me into Austen territory, especially if my friends will join me. I’ve even gone to the lengths of acquiring an appropriate hat, and to make another gown is but nothing in the pursuit of happiness. 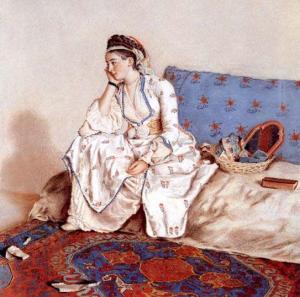 Woman in a Turkish interior Pastel on vellum, Jean-Étienne Liotard, 1749. Museum of Art and History, Geneva.

If I could truly be a fabulist, I might be tempted to adopt a style a la Turque, for a portrait by Copley or for my paramour. This portrait by Liotard– who was known for his Ottoman works—  is a great temptation, with her patterned overdress and belt with golden clasps, though she is thirty-three years earlier than The Abduction from the Seraglio, Mozart’s comedic and trendy 1782 opera.

If I made myself a Turque (and Reader, it is tempting though useless), I will confess it would be for the multiple pleasures of wearing it, knowing why it had been worn in the past, and for the pleasure of having it taken off me. Because we forget what the European fascination with exoticism and Orientalism meant: they meant sex. The Abduction itself is, in essence, a tale of sex trafficking.

And that is something we do forget about the past, that the clothing we adopt as we portray the past had meaning– sometimes a meaning we miss, when we layer costume upon clothing. Wives and mistresses alike were portrayed a la Turque, and some theorize that this style of portraiture was chosen to portray the sitter in timeless, classic dress. For Copley’s sitters, it was a way to be at the height of London fashion; for Lady Mary Montagu, Turkish dress allowed her to travel freely in the Ottoman Empire. But portraits of women in Turkish dress situated in Turkish interiors were also allusions to polygamy and to sexuality, and there is no way of escaping the fact that paintings of women were largely made for men.

So what, then, of fantasy dressing in the past? What sense can we make of historical representations of “Oriental” fashion? How do we understand what our clothing and our appearance means? Every choice we make is layered with meaning, in the present and in the past.  For women, routinely objectified by society, the meaning of our clothing is particularly important, even when, or perhaps especially, when it is not what we want to focus on.

2 thoughts on “Fashion, Fantasy, and Intention”