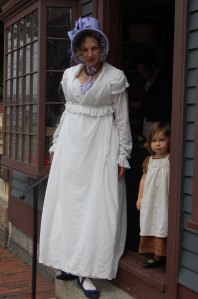 The complete ensemble, under supervision.

When I first moved to Providence, I lived in Fox Point, a slightly fringy-dingy neighborhood of Portuguese and Cape Verdean immigrants and their descendants that was cheap enough for students (and even today remains imperfectly gentrified: Providence, I love you dearly). As my then-boyfriend and I walked my dog, we passed a man whom I later came to know as the Block Captain, who remarked to my boyfriend, “Beeg wooman.” Any project I take on is, therefore, big, since I am nearly six feet tall.

Although I have schemes for a Big New Century Project (a complete 1585 ensemble), I’ll take a shortcut instead to my current enthusiasm and write about last weekend and the 1811 fashion plate reconstruction, which happily includes one of my favorite visual sources, early 19th century fashion plates — thanks to Scene in the Past’s albums and Ackemann’s Repository on the Internet Archive. 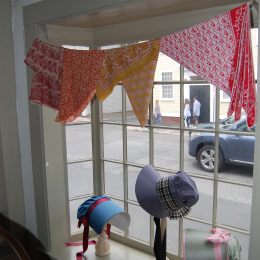 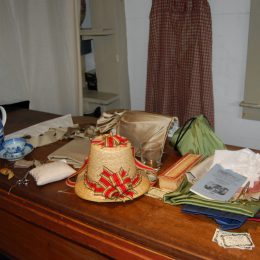 I’ve written about the canezou plate before, but not since I (mostly) completed it on the trip up to Salem. This 1811 plate appealed to me first because of the bonnet (checks!) and the necklace (lapis!), but then realized that the canezou and its petticoat were within my ability to complete.

The ensemble also seemed suitable for a summer day in Salem, which, while usually more humid than hot, calls for cool, lightweight, clothing that can withstand a potentially sweat-drenched day without melting. 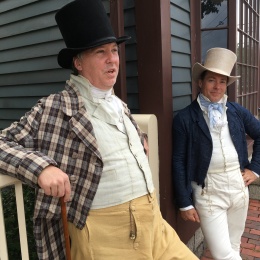 Gentlemen lounging on the street 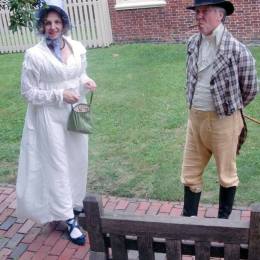 From start to finish was three weeks: canezou, bodiced petticoat, necklace, bonnet, and shoe trims, all a vernacular rendition of a high-fashion image, adapted to the materials at hand– though I did have to order bonnet taffeta from India, which arrived just in time– much faster than I could have expected in 1811 Salem! 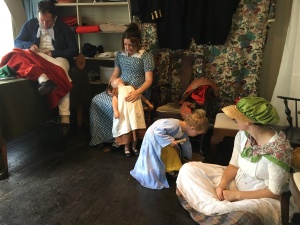 Setting up the shop for the fourth time was as much fun as the first time, and a little easier, given the practice I’ve had. I shared the shop with a tailor, Mr. B, of hat-making renown which made for a nice contrast interpreting men’s and women’s fashions and purchasing habits.

Packing up hat stands, bonnets, accessories, and furniture and driving them 470 miles is a kind of madness, but interpreting women in business and early shopping is one of my favorite historical enterprises.