It’s been a very busy time chez Calash, with many changes underway and to come. It’s hard to keep up with all the writing I’m doing everywhere, but eventually I’ll be back on topics of authenticity, standards, and whimsical Wednesdays.

This week, though, is all about checks. (Most weeks are, in some way, aren’t they?) Not paychecks, silly: linen checks.

We are headed out to Eastfield Village Friday afternoon where Mr Hiwell and the Young Mr will join in the 1833 militia muster, and Mr JS and I will occupy a house as a shop/tailoring business/punch-making and cooking establishment of one kind or another.

Mr Hiwell has been warned to expect a diet unlike his norm, and since his roundabout is white, we will quickly know if he is smuggling Oreos and barbeque sauce.

For the Young Mr, I have been making trousers. Yes, I do like things to line up. I wasn’t even paying that much attention when I cut these, but apparently that was  was enough.

Yes, even the buttons.

He’s also got a roundabout in the works, which I must focus on more closely to finish. This is patterned from an original in Henry Cooke’s collection, but… Mr. Cooke and I, on a very sticky Tuesday afternoon, did not have the Young Mr at hand to measure again. The original was too small: that we knew. What we did not know was that the boy had taken on a man’s shape– or, as a friend says, “he’s dude-shaped now!”–and the additions we made were not enough, except (barely) to the sleeves. 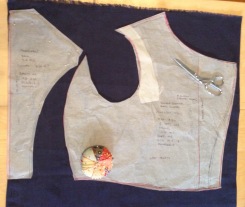 Oh, well. There was just enough to make it all work, and after some trials I realized it needed a lining. What kind of lining? A checked lining, of course! 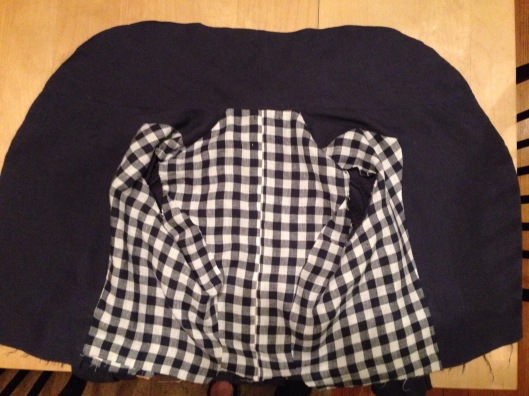 It seems okay, but these collars are strange to  me. 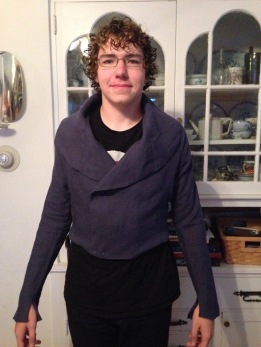 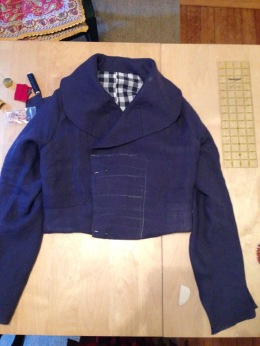 Well, at least he will be clad.

Let you think  I’m sewing only for the lad, I am in fact working on a gown for myself. There’s a hopeful yard or so of another check’d  linen from the stickiest fabric store on 39th Street lurking, but I do not think that apron will happen this week. Perhaps John Brown’s housekeeper will finish it someday.

At least there are already gowns and aprons ready-made that can travel with me. Someday soon I’d like to finish my new stays… winter will come soon enough, and more sewing then.

I don’t know about your weather, but we’re in full summer in New England, sultry and humid, with the occasional thunderstorm and power outage to enliven the evening. A sleigh ride sounds like fun today– and I know we all just finished complaining about the snow of February– but a brisk ride followed by a dance would certainly round out this week.

1833 approaches faster than expected, so it’s time to pick that back up and get serious. Not just a gown but petticoats and, ideally, a new shift should be made. This may be the project that breaks my resolve and finds the Bernina back on my table for cording a petticoat.

This image helps define the look of the early 1830s: not nearly as exaggerated as the fashion plates, these dresses and coats seem to fall into a progression from the 1820s– as you’d expect this early in the decade.

The gentleman at the back, in the drab colored suit, sports an interesting pair of trousers. I don’t think I know anyone ready to bust out the cossacks, but Mr Drab may be sporting a slightly modified pair. The collars and lapels show a shawl-shape that seems new, and modified from the more serpentine form seen in fashion plates– or else not yet as developed. There’s a range of headwear, too: tall hats on the left, a soft cap on the right. The Ladies’ Workbook has a pattern for one of those caps. Wonder how hard they are to make?

In the detail, we can also see the women’s hairstyles, less exaggerated than the fashion plates with their high top knots, and within the realm of possibility for those of us not practiced in historical hairstyle recreation.

So much has carried into this decade: colored neck wear, ruffles or chemisettes under women’s gowns, men’s hair brushed forward. As always, it’s the details that count. Tall shirt collars, rounded lapels, ladies’ sashes, the shape of sleeves. This should be a fun decade to represent.

Wool. It’s a thing. This dress from the Met has many of the markers of everyday fashion– a vernacular form, if you will, of what Deliverance Mapes Waldo is wearing in this portrait

Of course, dating these things is never a science when they don’t come with a clearly labeled tag you can affirm with research. The extant garment first. The sleeves say 1820s, the waistline says 1830s. Could it be 1840s? Perhaps. Without provenance, it’s really hard to know.

Mrs Waldo’s sleeves are clearly 1830s sleeves: full on gigot, sloped shoulder. It’s the contrast between her sleeves and the Met’s dress that makes me question their date (along with the fashion plates we saw yesterday).

Here’s a wool gown from England, land of the fabulous wools. 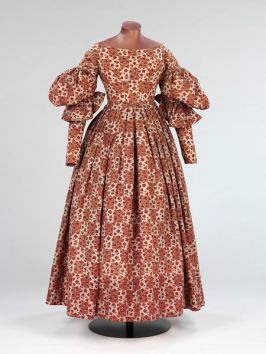 Here the sleeves are starting to be narrowed at the shoulder, taming the gigot. That places this 1836 or later, which is helpful. The bodice style is still not the pleated or smocked front of the 1840s, so that’s another marker for mid-to-late 1830s.

What will I do? I don’t know. I’ve ordered two patterns (and one for a new chemise, sigh). The Past Patterns Lowell Mill Girl dress appears to make up quite nicely, but I also ordered the Wisconsin Historical Society pattern for comparison. (Hey, when you can’t examine originals, you have to use the patterns.) Fabric is always a question, but if I’m feeling plain wool, there’s always Burnley & Trowbridge’s “Virginia Cloth.” I’ve worked with it before, so I know how it handles, and while the color looks itchy, it’s actually pretty soft.