I like to have a selection of things to wake up and panic about at 4:00 AM, don’t you? If it isn’t sewing, it’s some weird noise I think the car is making, whether the post office has lost a package, or if that noise is not the cat but instead a pending disaster. My brain generously provides me with a Whitman’s Sampler of anxieties.

To start with, that ball. For one thing, Mr S will probably have to wear his Saratoga coat, which means anything nice that I have won’t match him, temporally. For another, anything nice I think I could make in time is French and not American. So I have temporal and geographic anxiety disorder about something that is supposed to be fun. But there is this jacket I think I could make (and want to make), so I started playing with the pattern in my “sketching in muslin” method.

I haven’t got a lot of the purple, but I might have enough.

Mr S still needs a frock coat, so that has to be patterned and fitted; his breeches are still being sewn. He’ll need a wool coat no matter what, but whether it will be done by February is up for grabs.

The last two parts of my current crazy are a program in Newport on early March, with an early date of 1813, and programs in late March in Providence, which I have yet to develop. At least in Newport I don’t have to create the program, just dress and deliver. 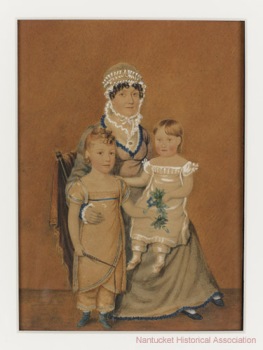 1813 is a fun place to start, and I have been looking at images for inspiration.

At right, Mrs Coffin  is a nice example of a New England woman in 1815, wearing the kind-of cross-over, v-neck, apron-front gown I’m thinking of making. I have some fabric reminiscent of a gown at the V&A, and I have some purple sheer cotton, as well as some green silk, so there’s a whole set of what-ifs? to enjoy.

Because that’s the rub: I enjoy all this planning and fretting and picking over details. I just wish it let me sleep a little longer some days.

Adorable, right? But so very miserable.

This year, it was about anxiety.

After some too-public parenting and a minor diversion home and back to Sturbridge this past weekend, I can say that yet another event has taught me yet another set of lessons.

The Young Mr, seen above in Full Pout Mode, had a roiling head full of anxiety made worse by heat and dehydration, for which he refused water and the suggestion of luxuriating in the air conditioned splendor of the upholstered sofette in the lobby of the Bullard Tavern. He made it through one activity and then I took him home because he felt so unwell, complaining of a headache and a stomach ache and feeling hot and then cold that I thought he was really ill. (We’ve had some tense “will-he-or-won’t-he puke-in-my-purse” train rides home, so I tend to overreact.)

Here he is as the ensign, displaying the colors.

Not until Auburn and a large bottle of Gatorade later, when suddenly his stomachache and headache were gone, did I figure out that it was mild heat exhaustion and anxiety, not flu or something worse. And then realized I could have taken him to the first aid station instead of home. But, once home, after a nap and a fight and a dish of curry, he’d promised to go back up on Sunday, which was much better.

Their lyrics were hilarious.

Again, he got to serve as ensign and carry the colors, marching behind the guys as they sang their way through the village. But somehow, Sunday, everything seemed better than it had the day before, when he hadn’t told me how much he fears the start of high school, and how worried he is about his future.  No more reading the New York Times for him…

This isn’t the costume or action report you might want, but living history with an adolescent is challenging. The Young Mr is just too young to field (he’s only 14 but almost 15) and he doesn’t want to be a drummer. It’s a challenge to find things that he can legally and safely do that integrate him into the unit of guys, which is what he really craves. Perhaps it’s because he gets to try out what it’s like to be a man, while still being a boy.