No, it’s not my photo of the Young Mr: I didn’t even take a real camera on this trip. These top two photos are thanks to Gary V’s Flickr stream.

Here the kid is eating. I think he spent most of the weekend eating. There are some fine calves in the 10th Mass, aren’t there? Look what a well-fitted pair of overalls can do for you. 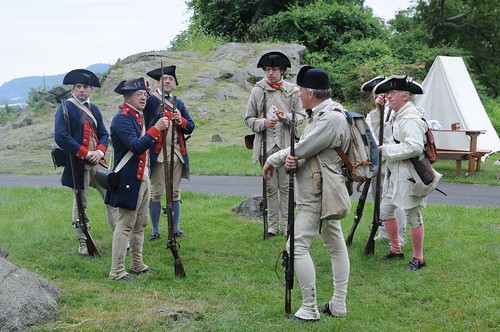 We all benefited from hanging around Niel DeMarino’s historic bakery. Broken cookies are just as delicious as whole, if not better, and the ginger cakes were the best I’d ever had. It’s a pity that one can’t really bake in camp…

Mr S thinks I should tell the story of my 90-minute stint in solitary at Stony Point, but I’m not quite prepared for that.

Instead, I shall recount the Hose Water Coffee.

As fans of the 18th century know, orange water and rose water are not uncommon flavors in the receipts found in Hannah Glasse or Amelia Simmons‘ cookbooks.

Hose water is something else again. It is not improved with age.

At Stony Point, there was water at a stone ‘bubbler’ (props to those who used this Rhode Island term for the street furniture known elsewhere as a drinking fountain), which was hard to see in the gathering dusk the night we arrived. There was also a hose, proximate to a saw horse with a sign for Pedestrian Only traffic, and just down the path from our tents.

Our kitchen, dining table, and parlour

Following Heather’s excellent advice, I planned to make cold coffee overnight so that we could be caffeinated in the morning. Lazily and unwisely, I used the hose to fill the pitcher of doom that first evening.

What is the essence of tire? L’eau latex? That’s what we had: strong coffee with a strong base note and unmistakable top note and bountiful middle notes of hose. Did we drink it? Of course we did: we were up at 5, and coffee was not provided until 8:30, when we all had second breakfast.

Saturday night, I skulked back to the bubbler and filled the pitcher again for Sunday’s coffee. This time, the clear, strong liquid was redolent only of coffee, and was judged better than the hot coffee (which had, in fairness, not been made with hose water, either). I’ll definitely repeat the coffee experiment, though I think I can use a little less coffee to water– not that I measured.