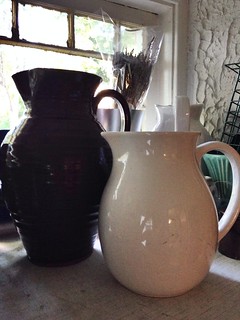 This is not a pitcher

Sometimes a pitcher is not a pitcher. In the same way that Matthiessen‘s Snow Leopard is not about a snow leopard, this was not about me: this was about the woman who approached me as I walked with Cat to the water bubbler with this white ceramic pitcher from Home Goods.

She stopped me to say, “You shouldn’t have a pitcher in camp. You should have a bucket.”

This is true, as far as it goes: but really, I should have a tin kettle (and I do). But the reasoning I was given had to do not so much with the fragility of the pitcher (which I pack in a basket or wrap in our towels and stuff into something in the supply wagon) as it did with the myth of Molly Pitcher. For an explication of the Molly Pitcher myth, I refer you to the Journal of the American Revolution, because, as I said to the woman who approached me, “It’s not my fight.”

So what’s the point? Maybe there are several:

One might be, Everyone has a hobby horse. Some of us are made mad by The Bodice. Some of us cannot abide makeup on “camp followers” who look like stragglers from a high school production of Sweeny Todd. Some of us are material culture and camp equipment fanatics– begone, ironware! Still others twitch at the baggy, off-the-rack cut and fit of some uniforms.

For another, This wasn’t about me– or my pitcher. The woman who approached me had a thing about Molly Pitcher and the myth of the woman on the battlefield with a pitcher, bringing water to the men. My pitcher and I were merely a trigger. 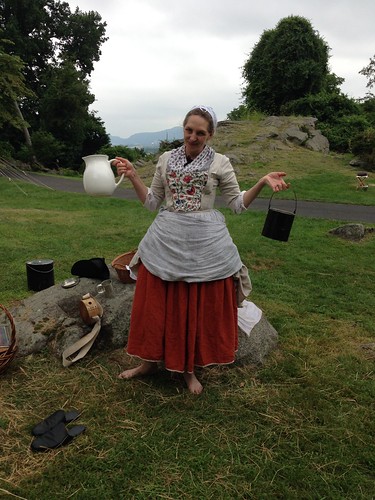 Everybody’s got something to hide ‘cept for me and my…pitcher? or kettle?

And for a third, We all make choices and compromises. I chose not to bring the antique family copper coffee pot into the field, and also chose not to let the coffee and water sit overnight in the tin kettle. I chose, too, to use the white pitcher and a redware one for water that we drank all day long. When it’s hot, I slice lemons or limes into the water to make it easier to drink as much water as we need to in a day spent sweating outdoors, and it prevents scurvy to boot.

Fourth? We can all, always, make better choices. Few among us achieves true 18th century purity– I can assure you that even had I dashed my pitcher to the ground Saturday and dropped to my knees in repentance, I was not 18th century to the skin. There are monthly occurrences that I won’t go old school on, and on this point I shall not be moved.

But back at my ‘rock maple’ table, I could do better. We could/should have but one wooden bowl (mine), and the boys could/should have tin bowls, and we could/should swap out the redware canns with the handles broken off, but they make a nice refugee statement and until they break completely…

And there is a fabulous copper cistern by Goose Bay Workshops that I covet for its copper glory, but since it is not tinned inside, no lemons or limes would be allowed, and it would be hard to argue it for a Light Company. That puts me at another tin kettle, designated for water, and dipping our cups in. I can probably live with that choice.

But then, if I encounter someone who wants to talk about Molly Kettle, I’ll know I’m in real trouble.