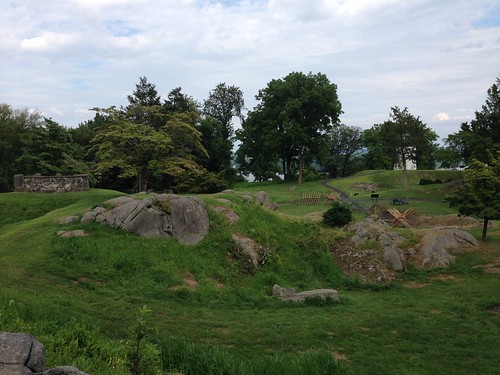 In a word: hilarious.

The Young Mr started the weekend with a 5 Hour Grump (no sugar crash!) that started at home and lasted until he spotted a deer in the woods near West Point at 7:17 PM. The situation improved somewhat when we arrived at Stony Point Battlefield and saw Mr and Mrs P. Perhaps at that point he finally believed me that this was going to be similar to Saratoga or Sturbridge: people he knew, doing the things we normally do, in the usual funny clothes.

There’s a rhythm to these that is predictable and therefore comforting: Mr and Mrs P arrive first, then we show up with our traveling circus, and once we are set up and in bed, we stay awake because Mr HC will arrive after dark, and we keep the mallet out to help him, even though he doesn’t really need our help.

I made new IRL friends with people I’d seen on the interwebs, which is always nice, and made solid progress on that 1812 coat, which also passed a fit inspection (thank goodness! I can be taught!). 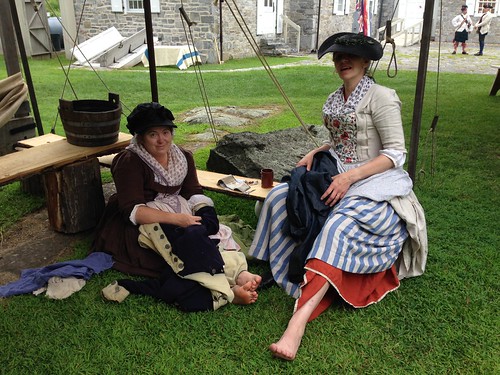 Cat and Kitty at Stony Point

But the Young Mr really stole the show on Saturday.

Mr FC arrived on Friday morning with his Young Master W in tow, and they were welcome additions, especially when the Young Mr loitered in his tent after nooning, shirking a fatigue. Mr FC and Mr HC each grabbed one of those enormously long legs, and pulled the giggling private from his tent, the sergeant yelling at him all the while. When the kid got on his feet, his slick leather soles betrayed him and he went ass over teakettle in a classic 360 degree Stan Laurel or Harold Lloyd slapstick maneuver that left him unscathed and back upright with surprising rapidity…and all the while, the sergeant yelled at him, “Hurry up! Get dressed and into line! Don’t tell me you still don’t know how to put on your equipment!” which only makes the kid laugh harder, but fortunately also makes him work harder.

I skipped the battle, though I’m told there were some very satisfying deaths at a cedar tree on a small rise; Mr S went down, and the Young Mr tried to revive him with water, but succeeded only in soaking his hunting frock. 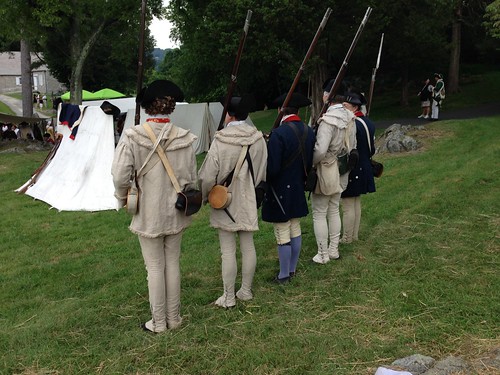 The Usual View of the Usual Suspects

Afterwards the battle and a great deal of water, there were not the usual cooking and fire minding chores, since the site provided dinner. Mr FC’s Young Master W had charge of his mother’s camera for the weekend, and since his brother had declined to come, Master W thought it would be a fine thing to take photos of the frequent trains to torment his train-loving brother with.

So Mr FC, Young Master W, Mr S, the Young Mr and I all trooped down the hill to the train tracks, accompanied by Lambchop, who was, in fairness, only wearing a wig and a round hat and not Lambchop itself, and should therefore be known here as Mr M.

So yes: four Continental soldiers and their laundress trooped down the hill with a boy to watch a freight train go by, and to say, Wow! and Oooh! as it sped past hauling containers, some stacked double height, and barely missing the railroad bridge, or so it seemed to us.

2 thoughts on “Stony Point: The Overview”