No, I still haven’t written to the museum in Sweden– I had fabric shopping to do. Well, not had to, but when someone offers to take you to a new fabric store you haven’t seen before, you go.

Reader, I scored. Mr S will have a new fabulous and toasty waistcoat thanks to a 5/8 of a yard remnant of the coziest Italian double faced wool I have ever petted. It should be a kitten! Mr Isaacs here has a lovely black waistcoat and while I cannot achieve that fabulousness without a new pattern (sigh) and I think that waistcoat is silk, you get the general green-and-black idea. Mr S totally has that hat.

But in thinking about the Spencer issue (and yes, I scored some on-sale broadcloth so I can make another one on the way to cutting into that K&P wool), I asked Mr Cooke about clasps, since the Spencers I’m interested in are so very clearly grounded in menswear generally, and uniforms particularly. The answer was what I’d expected: buttons and buttonholes or braid loops on dragoons’ and hussars’ coats, hooks and eyes sandwiched between shell and lining on center-front closing uniform coats.

So I went back to look at menswear, because somewhere the phrase “miniature frock coat” rattled in my head, and I knew I wanted to re-draft the pattern for the front anyway, to get closer to the high stand and fall collar of the Swedish original.

The other collection that’s extremely useful is the LACMA collection, because they have patterns up on their website. 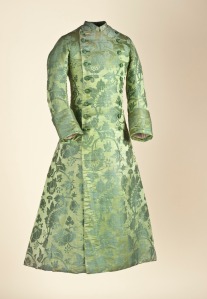 I’ve already started to crib a new two-part sleeve pattern from a frock coat pattern, so now I think the next step to getting the look I want is to crib from the LACMA banyan pattern. It’s earlier than the Spencer by some 30 years or more, but the neckline looks like a better place to start.

And, bonus, along the way I’ll learn more about menswear to the ultimate benefit of those guys I sew for.

Before I get any farther along in the process of making a sacque (and I have not made much progress) I thought I should start to really look at gowns, and try to understand them.

Not only do I need to understand how they’re made, I want to understand how they change over time, and what’s appropriate for different time periods and situations. This will, or could, have some bearing on what I make for the gentleman accompanying me to the celebrations for which this gown is being made. If I start from Mr S, whose best coat right now is the 1777 Saratoga private’s coat, then I ought to have nothing better than a second-hand sacque several years out of date, and that is reaching indeed. 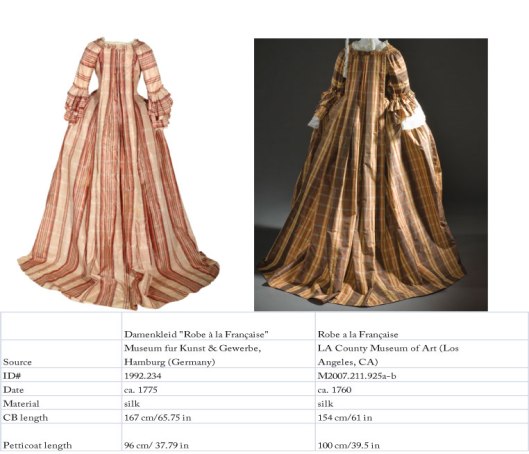 What good fortune it is that the LACMA dress seems to be a gown in flux! This is the brown silk cross-barred gown with an assigned date of ca. 1760, which seems to have been abandoned in mid-alterations. Trim down the rights and left fronts ends abruptly at the waist, and two halves of what might have been a compère front lack any trim but boast plenty of holes. The front skirts come close together, but it’s hard to tell if they are meant to nearly close, or if the gown is fitted to a mannequin that’s too small and not adequately padded out.

Replicating a gown in mid-alterations would be interesting, but not what you’d wear to a ball, so I kept looking. In Hamburg there is another cross-barred sacque-back gown from about this era. There are similarities and differences, and never as much information as you’d like to have. Who owned and wore these? Who made them? When and where were they worn? We’ll never know, but at least with two similar gowns one can fill in some details for another, or help us understand them both.

The serpentine trim on the pink gown in Hamburg makes clear how unfinished or mid-alteration the brown gown in LA really is despite the visual interest created by the fabric itself. 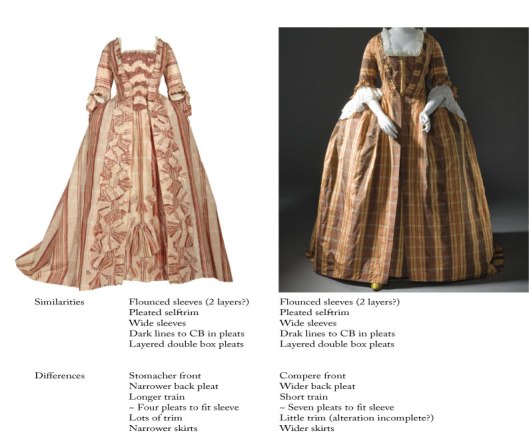 So, what to do for my gown? And when will it be from? LACMA is hedging their bets with ca. 1760. I think Hamburg is pushing it a bit late with ca. 1775, but a ca. 1770 date for a gown based on the two seems reasonable. That would mean that the coat Mr S wears should also be ca. 1770, or newer than his green linen coat and older than his Saratoga coat. And luckily, I already have a plan, some fabric, and a pattern as a place to start.

While the ball itself has no date per se, it is in celebration of Washington’s Birthday, which puts it after 1775 at the earliest (think transfer of command of the Continental Army in Cambridge). Does that make a ca. 1770 gown too early? It would depend, I think on how one imagined the ball and oneself. If you’re a frugal woman who has lost much in the war, you’ll remake your gown; should the flounces become the shirred cuffs of later gowns? Could the kind-of compère front of the LACMA gown be a stomacher cut in half and stitched to the sides, with the pin hole indicating where trim had been removed from a once-was stomacher? Is it reasonable to make a compère front for a ca. 1770 gown? I want one mostly to avoid the stomacher angst I always seem to have, and in a way it marks a place between stomacher-front and front-closing gowns.

These unprovenanced gowns stand without the particular context and personality of their owners; the fun and the challenge for us, as costumers and reenactors, is in trying to bring our personalities to the fact-based garments we create.