Or, if not failure, at least screwing up.

In my more exhausted moments, I make interesting mistakes and choices. Once, I engaged in an argument at work in which I repeatedly used “orange” when I meant “blue.” Another time, I lost the word “refrigerator” and had to coin the phrase “big cold box where we keep the food.” My brain is an interesting place.

Round two of thread pulling to cut the second sheet correctly.

But it was not obvious to me until I held the fabric up, ready to iron, and realized it was just a little bit longer than I am tall. Since I am not 7’ tall, something was clearly wrong. I dropped the fabric to the ironing board, messaged Drunk Tailor, and took to bed in mortification and hope of a nap.

I tell you this story not just to make you laugh, bring you a modicum of schadenfreude, or to make plain that we all screw up sometimes, but to remind you that mockups are good, and so is math on paper.

Really, I’m not sure how this happened. But there it is: upside down.

Starting a project without laying down some ideas on paper or making a muslin is a quick trip to madness, or at least dismay. Creative problem solving will undoubtedly result, but that’s energy you could put into planning your next project instead of salvaging your current one (as I have salvaged my sheet).

Here are some measures I’ve learned to take to prevent repeating hilarious mistakes:

It is by no means an extensive list, but once you know the types of mistakes you are most likely to make, you can take measures to prevent them. You know, like measuring twice and cutting once, or doing math on paper to double check your work. 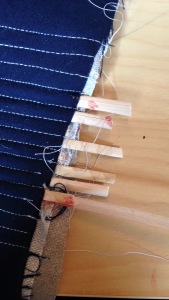 Sometimes I am a terrible brat, as in this past weekend, when the autocorrect on my phone insisted that the proud four-letter Anglo-Saxon words I was typing were not what I meant to say. Darn tootin’ they were.

This is not my first rodeo with stays, but somehow I’d forgotten about the special stabby hell of boning the beasts. I’m machine sewing the channels for these, mostly because I calculated the time required to completely hand-sew them and realized I would not finish them before I needed them. I’ve rationalized this by acknowledging that I’m not using the hand-woven brown wool sateen I covet, but instead a dark blue wool twill.

I know, I know: there’s a reason staymaking was a man’s trade. My hands are pretty strong, but it took some doing to figure out how to slide the pieces in neatly without jabbing the ends repeatedly into the freshly re-opened split on my thumb. 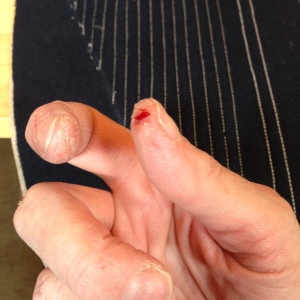 d’oh! surgical tape made this *much* better later.

It takes discipline to keep doing this, the way it takes some discipline not to eat ice cream for breakfast just because you can (though I did, just this week). Spencers and dresses are so tempting, but there’s not point to making a new dress of wonder unless I have the stays to wear it over: infrastructure is required.

The stomacher and the two front pieces are boned… six more pieces plus whipping and eyelets and binding, oh, my! It’ll be a race to have them done by June 24th:  Discipline’s the thing. 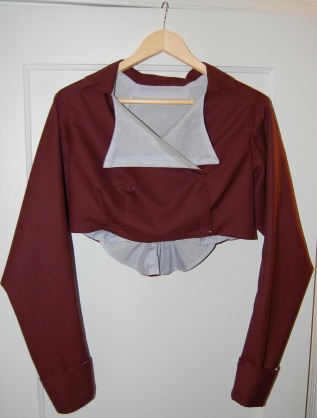 It’s better on a human than on a hanger.

I’m close to being finished– all that remains are closures, but the sewing is done. It fits, though I haven’t yet tried it on over stays.  It looks less wretched in the mirror than it does on a hanger, I will give it that.

The wool is a yard and a quarter worsted remnant, and while it has a nice hand, it was sometimes annoying to press. It may have been the fault of the silk, though; I used a very light weight silk–even lighter than Booth’s “persians”– and that was probably a mistake.

The Swedish Spencer closes with clasps, and while hooks and eyes are pretty common for center-closing garments (men’s and women’s) “clasps” was new to me. The double-breasted riding habit coat in Janet Arnold (from the Salisbury Museum, no photos online) closes with covered buttons. That seems reasonable for this worsted trial garment. I’m beginning to wonder if the Swedish Spencer is really finished, or if the clasps might be a later addition. Time to write a letter, I think…